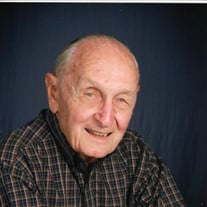 John Robert McClure, 88, passed away peacefully on August 16, 2017, at Amara Hospice in Edinburg, Texas. He was born on October 27, 1928 in Spring Grove, Indiana to Fred Cornwell McClure and Mary Gladys Laughlin. Known to all his friends and family as Bob, he grew up in Houston, Texas and attended Southern Methodist University in Dallas, Texas where he met his beloved wife of 49 years, Ginger. He graduated from SMU in 1949 and served in the U.S. Naval Reserves for 5 years. Bob moved with his family to McAllen in 1960 and was an officer for First National Bank of McAllen, later Chase Bank, for 30 years. He was an active member of First United Methodist Church, where he served as Chairman of the Administrative Board and initiated the program “Seniors on the Go” with his wife. Bob and Ginger were instrumental in the development of the McAllen International Museum, where he served on the board. Bob was an active volunteer for many civic organizations. Among others, he served on the boards of the Salvation Army, the United Fund, the American Heart Association, the Parks Board, the McAllen Country Club, Rotary Club of McAllen and the Tip O’Texas Girl Scouts. He was treasurer of the Rio Grande Valley International Music Festival and active with the McAllen Chamber of Commerce. In addition, he shared his extensive business experience for many years as a mentor with SCORE. Preceded in death by his wife Virginia (Ginger) Lowrey McClure, Bob is survived by his daughter Ginna Grimes of Kyle, Texas, grandchildren Virginia and Chris Franco of Austin and Robert Grimes of Houston, great-grandchildren Gavin Franco and Bryan Poulos, and his very good friend Judy Bland. The family would like to gratefully acknowledge the kindness and care shown by the staffs of The Gardens of Brookridge and Amara Hospice. Memorial services for Bob McClure will be held at 11:00 a.m., Monday, August 21, 2017 at First United Methodist Church, McAllen with Pastor Ricky Sanderford officiating. In lieu of flowers, memorial donations may be given to First United Methodist Church, McAllen, the Salvation Army, or Hand Cranked Transportation (in care of First United Methodist Church, McAllen).

John Robert McClure, 88, passed away peacefully on August 16, 2017, at Amara Hospice in Edinburg, Texas. He was born on October 27, 1928 in Spring Grove, Indiana to Fred Cornwell McClure and Mary Gladys Laughlin. Known to all his friends and... View Obituary & Service Information

The family of John Robert McClure created this Life Tributes page to make it easy to share your memories.