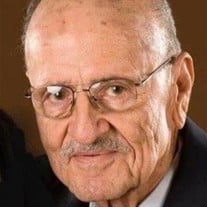 Joel De Leon Sr. passed away on March 14 after a brief but brave battle with cancer. Born in 1931 to Anacleto De Leon and Amelia Ramirez in McAllen, TX, Joel was a well-known local businessman who lived a full life beloved by his many friends and family members. The oldest of eight children, Joel began working in auto mechanics at a young age, displaying an aptitude and talent that brought him many opportunities. He enlisted in the Air Force during the Korean War and was stationed at Eielson AFB in Alaska where he served honorably. He returned home and married his sweetheart, Olga Guerra, in 1951. Together, Joel and Olga built a loving family and a successful business, De Leon Auto Accessories; which was later expanded into De Leon Racing Engines by his sons. Joel and Olga traveled the world together, including to Switzerland, where he made the local news when he witnessed a mugging and chased down the thief. Joel was an avid racing fan, an interest he passed on to his children. He encouraged them in their racing careers and in the creation of their part of the family business. Joel delighted in cheering his grandkids on throughout their lives and cared deeply about his great grandchildren. Later in life, Joel discovered a passion for the history of the De Leon family and other founding Tejano settlers. He became a leading amateur researcher of Texas history and was honored to represent the founding families at the unveiling of the Tejano Monument at the Texas state capitol grounds in 2012. He was beloved by many in the genealogy community. Towards the end of his life, Joel said he felt he had accomplished more than he ever thought he would. His greatest pride in life was that his children were good and kind. Joel was a man for whom family was paramount- both in the past and in the future. When generations look back, Joel will be remembered among the great touchstones of De Leon family history. Joel is survived by his wife Olga Guerra De Leon; his children, Joel Jr. (Betty), Javier (Luisa), Jaime (Martha), Richard (Priscilla) and Yvette De Leon Cantu; his grandchildren Monica (Hiram), Joey (Jennifer), Javi, Melissa (Patrick), Larissa, Jaime Jr., Jacquelyn, Douglas, Katherine, and Nicholas; four great grandchildren; as well as his brother Ruben De Leon and sisters Bertha Garcia, Maria del Carmen Heckman, Amelia Moino, Rebecca DeLeon and Imelda Horne. Joel was preceded in death by his parents, Anacleto and Amelia De Leon, infant brother Baldemar, and sister Evangelina De Leon. At his request, his remains were cremated. Private family services will be held at a later date.

Joel De Leon Sr. passed away on March 14 after a brief but brave battle with cancer. Born in 1931 to Anacleto De Leon and Amelia Ramirez in McAllen, TX, Joel was a well-known local businessman who lived a full life beloved by his many friends... View Obituary & Service Information

The family of Joel De Leon Sr. created this Life Tributes page to make it easy to share your memories.

Joel De Leon Sr. passed away on March 14 after a brief but brave...