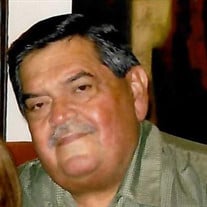 Joe Pineda, 75, of McAllen Texas, lost a valiant fight to cancer at the comfort of his own home surrounded by his family on Thursday February 27, 2020. He is survived by his loving wife Alma of 14 years, son Rene (Maggie) Pineda, his step-children Ricardo and Alejandro De La O and Andrea Guerra, grandchildren: Crystina Renee, Genesis Garcia and OREO his beloved furry companion who never left his side. He is preceded in death by his parents Eligio and Alicia Pineda, brother Eligio Pineda Jr., nephews Gilbert Cabrera Jr. and Javier Jaime Villarreal. He is survived by his four sisters Yolanda (Gilbert ) Cabrera, Alicia (Hector) Villarreal, Olivia (Rey) Sanchez, Raquel (Adan) Navarro. Joe Pineda started working with the McAllen Police Department as an Emergency Dispatcher in 1982 and later at Property/Evidence Custodian until his retirement of 24 years in 2006. Joe Pineda served many unofficial roles and wore different hats while he was employed there. He was the first to volunteer and cook for different barbecues, fundraisers and played softball for many years with the Police Department. Joe Pineda was a constant figure for all of the Police Cadets while going through the Emergency Vehicle Operations Course (EVOC) Training, not because he was an instructor, but because he would volunteer his time to cook and feed the cadets as they endured hours on the hot tarmac at the Moore Airfield as they spent hours learning how to drive a police car. Joe Pineda loved the McAllen Police Department because all of the Officers and civilian employees were an extension of his family. Joe Pineda was as much a part of the McAllen Police Department as the jail itself. He was passionate about his job, and at times vocal about his views that sometimes would rub superiors the wrong way, but he was always respected and listened to. He was a mentor, role model, father figure, brother and friend to everyone from the custodian all the way to the Chief of Police, always with a cup of coffee in hand ready to talk to, or listen to anyone who needed it. A friend recently said that if you didn't know Joe Pineda, then you didn't know the McAllen Police Department. Joe loved all sports but was most passionate for the Dallas Cowboys. In the fashion of a true family man, not only was he loving father, son, and brother, he was also a doting uncle to his many nieces and nephews, front row and center at as many special events as he could be and forever hosting or attending family BBQ's with his tejano music serving as a background. He will be greatly missed and remembered by all who loved him! Visitation will be 5:00 PM to 8:00 PM Rosary will be 7:00 PM Monday, March 2nd, 2020 at Kreidler Funeral Home. The funeral service will be 10:00 AM Tuesday March 3rd, 2020 at Sacred Heart Catholic Church in McAllen with the burial to follow at Roselawn Cemetery.

Joe Pineda, 75, of McAllen Texas, lost a valiant fight to cancer at the comfort of his own home surrounded by his family on Thursday February 27, 2020. He is survived by his loving wife Alma of 14 years, son Rene (Maggie) Pineda, his step-children... View Obituary & Service Information

The family of Joe Pineda created this Life Tributes page to make it easy to share your memories.