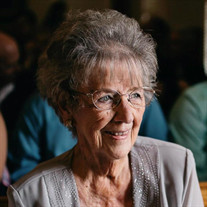 Former McAllen, Texas resident JoAnne Pfeifer, 90, died June 15, 2022, at Brighton Senior Living in Katy, Texas. A graveside service will be held at 3:00pm on Monday, June 20, 2022, at Valley Memorial Gardens, Mission, Texas. Mrs. Pfeifer was born September 11, 1931, in Perry, Iowa. At a very early age, JoAnne and her family moved to McAllen, Texas. She graduated from McAllen High School in 1948. She met and married Henry Newton Burgin II in 1952 who was an Air Corp pilot stationed in Pensacola, Florida. JoAnne was widowed in 1955 and moved back to McAllen, Texas where she reacquainted with Ronald (Ronnie) T Pfeifer. They married in 1956 and together raised 5 children. She is survived by her brother, Perry Johnson, and children Chip Burgin (Cathy), Jeffery Allen Pfeifer (Denise), Patty Ann Lambert (Rick), and Rebecca Marie Pfeifer. She is also survived by 11 grandchildren and 8 (soon to be 10) great-grandchildren who affectionately referred to her as “Grams”. JoAnne was preceded in death by her mother (Isabelle T Johnson), brothers (Richard Johnson and Robert Johnson) and one sister (Shirley Corso). Also, husbands Henry Newton Burgin II and Ronald (Ronnie) T Pfeifer, and daughters Peggy Jo Pfeifer and infant JoAnne Pfeifer. JoAnne enjoyed meeting with her weekly bridge club at the McAllen Country Club and taking frequent trips to Las Vegas with her sister. Our “matriarch”, which she so often referred to herself as, was also an avid reader and loved working crossword puzzles which kept her mind sharp as a tack and her witty comebacks often keeping her family in laughter. In lieu of flowers or cards, please keep her family in your prayers.

The family of JoAnne Pfeifer created this Life Tributes page to make it easy to share your memories.