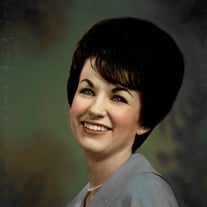 Jo Ann Noser Smith, 77, passed away surrounded by her family on Oct. 13, 2019, after a courageous battle with bone cancer. Born to Leo and Allegra Noser, she attended Our Lady of Sorrows (McAllen), Incarnate Word Academy (Corpus Christi) and University of Texas (Austin). She was a loyal member of OLS Catholic Church throughout her life. As a parent, few in this world have demonstrated the devotion, self-sacrifice, and love that she showed to her children and grandchildren, including several “adopted” sons and daughters who looked to her as a second mom. Jo Ann led an active life that cannot be encapsulated properly here. She was involved with anything and everything that her children or grandchildren pursued. Including the Girl Scouts of America, Marine Military Academy Parents Foundation, and the Memorial FFA program. Jo Ann was an avid bowler for much of her life (among other pursuits, hobbies, etc.). Her wit, intellect, patriotism, and resilience were rivaled only by her compassion, empathy, and concern for others. She leaves behind a vacuum that will not be filled. She was preceded in death by her parents, Leo and Allegra Noser; her husband, Weldon Smith (USBP Agent/Pilot); brother, Ralph Noser. She is survived by her children, Jason Weldon Smith, Terry Wayne Smith (Melissa), and Diana Michelle Smith; loving grandchildren, Ira Smith, Hannah Bradford, Lili Bradford, Charlene Smith, Ragan Smith, Weldon Smith, and Sean Smith; a number of “adopted” children including Thomas Fric, Raul Trevino, Selena Jones, and Daniel McKnight; cousins, and countless friends. Services will be held on Sat, Oct. 19, 2019, at Our Lady of Sorrows Church, McAllen with a Rosary at 8:30 AM and Funeral Mass at 9 AM. Burial will follow at Valley Memorial Gardens. Pallbearers will be Joe Esparza (USBP), SGM H.M. Tracy Hawkins (USA), Andrew Prukop, Terry Keelin, Roy Vargas, Greg Goby, Thomas Fric, and Raul Trevino. Memorial donations in memory of Jo Ann can be made to : MD Anderson Cancer Center, PO BOX 4486, Houston, TX, 77210 or to Spina Bifida Association, 4590 MacArthur Blvd, NW Suite 250, Washington, DC, 20007.

Jo Ann Noser Smith, 77, passed away surrounded by her family on Oct. 13, 2019, after a courageous battle with bone cancer. Born to Leo and Allegra Noser, she attended Our Lady of Sorrows (McAllen), Incarnate Word Academy (Corpus Christi) and... View Obituary & Service Information

The family of JoAnn Noser Smith created this Life Tributes page to make it easy to share your memories.

Jo Ann Noser Smith, 77, passed away surrounded by her family...