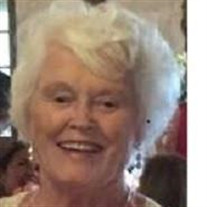 Joan Caroline Tavarez passed away Thursday, May 11, 2017. Born in Sioux Falls, South Dakota on October 28, 1933, she was the only child of Beulah and John Hooker. Joan graduated from the Sioux Valley Hospital School of Nursing as a Registered Nurse. She worked as a R.N. at the Sioux Valley Hospital in Labor & Delivery, which she loved. It was at Sioux Valley Hospital where she met her husband Dr. Vicente Tavarez, Jr. Joan and Vicente Tavarez moved to many different states while he was continuing his surgical education, from Monterrey, Mexico to Denver, Colorado, and Norfolk, Virginia and finally settling down in McAllen, Texas in 1964. Joan and Vicente made life-long friends in each city in which they lived, but McAllen became their “FOREVER” home. Joan Tavarez’ life motto was “You Bloom Where You’re Planted” and as such she welcomed many family members, friends, and high school exchange students into her home on many occasions. Joan Tavarez was always quick to set an extra plate of food at the table upon short notice for many nurses and resident doctors that were away from their hometowns in order to have a home-cooked meal. Joan Tavarez was a devoted wife and mother to her family. Her devotion to her family led her to be Girl or Boy Scout Troop Leaders at various stages, chaperone for Dance Clinics, organize school activities, as well as keep her husband’s surgical practice running efficiently. She also taught Sunday School at Calvary Baptist Church. Joan became an avid hunter so that she could accompany her husband on hunting trips. Joan Tavarez loved being involved in organizations which help others succeed. She was a board member for the Easter Seals and was the recipient of the “1992 Humanitarian of the Year” Award alongside her husband Dr. Vicente Tavarez, Jr. Other organizations in which Joan devoted so much of her time included: McAllen Reviewer’s Guild, McAllen Medical Auxiliary Club, Make-a-Wish, P.E.O, International Women’s Board UTRGV Foundation, Vannie Cook Cancer Center – Board Member for 30 years. In 2002, she was appointed by Governor Rick Perry to the Texas Department of Housing and Community Affairs, Manufactured Housing Board. Joan Tavarez is pre-deceased by her husband of 40 years, Dr. Vicente Tavarez, Jr., who passed away in October 1996. She is survived by her children: Sharon Mehner of Austin, TX., Vicente Tavarez and wife Debbie of Durango, CO., Terri Tavarez Odenweller and her husband Bob of Golden, CO., and Ileana Tavarez Payne and her husband Wade of San Antonio, TX. Her grandchildren include: John Mehner of Fort Collins, CO., Zachary Tavarez and his wife Stephanie of San Antonio, TX., Julia Mehner of Lakewood, CO., Joshua Tavarez of Blanco, TX, Allena Tavarez Chapman and her husband Noah of Abilene, TX., Elise Payne and Catherine Payne of San Antonio, TX. She is survived by her cousins, Beverly Roy of Vail, AZ, Laird Brown of Depoe Bay, OR, Lori Brown of Portland, OR, and Tami Brown McCallum of Salem, OR. Tavarez Family: Dr. Hiram and Kathe Tavarez of McAllen, Dr. Marvin and Alice Tavarez of McAllen, Hilda Menendez of Rio Bravo, Mexico. Marvin Tavarez, Jr of Pleasanton, TX., Ronnie Tavarez and wife Eva Tavarez and sons Vince & Ryan of McAllen, TX, Hiram Tavarez, Jr. and wife Janna and son Cole of New Braunfels, TX., Ann Marguerite Hudson and husband Tom and children Lauren, Alec, Jacob and Luke of Round Rock, TX., Kathleen Pebley and husband Trey and sons Harris and Gavin of McAllen, Laura Menendez of Rio Bravo, Mexico and Patricia Menendez of Rio Bravo, Mexico. A visitation will be held Wednesday May, 17th, 2017 from 6:00 PM to 8:00 PM at Kreidler Funeral Home. A Celebration of Life will be held Thursday May 18, 2017 at Calvary Baptist Church at 10:00 AM with interment held at Valley Memorial Gardens in Mission following the service.

Joan Caroline Tavarez passed away Thursday, May 11, 2017. Born in Sioux Falls, South Dakota on October 28, 1933, she was the only child of Beulah and John Hooker. Joan graduated from the Sioux Valley Hospital School of Nursing as a Registered... View Obituary & Service Information

The family of Joan Caroline Tavarez created this Life Tributes page to make it easy to share your memories.