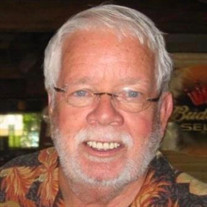 James Glenn Henderson, born on June 17,1943, passed away of natural causes at 77 years old, surrounded by his wife and children on July 23,2020. He was born in McAllen,Tx to Robert and Lujane Henderson. He graduated from PSJA High School, and then attended Lamar (as a member of a National Championship tennis team), UCLA, and completed his bachelor’s degree at the University of Pan American. After graduating, he proudly served in the US Air Force. Jim moved back to the Valley where he made a lifelong career selling packaging to the produce industry. He adored the industry and all the wonderful friends he met along the way. Jim is survived by his wife of 53 years, Karen, and his four children, Ashlee (Lance), Brandon (Flo), Chris (Tiffany), and Jimmy (Brenda), his brothers Bob (Genie), Bill (Jody) and sister Sarah (Gary). He was loved and entertained by his 13 grandchildren, Braxton, Brynn, Haden, Jonah, Finn, Gunnar, Westyn, Mallory, Emmory, Colton, Macy, Hailey, Lori and many nieces and nephews. Jim passed away just as peaceful as his spirit. He never met a stranger. Jim was a life long learner and bought books on a variety of topics that piqued his interest. He had the kindest heart and was loved by all. Jim lived an unabashedly adventurous and joyful life, even at the height of his Multiple Sclerosis. He did so with courage and would often respond with, “I’m too blessed to complain.” He was an avid outdoorsman, swimmer, and accomplished boater. He continued exercising until his final days. His adventurous spirit led him and his good friend, Robert Yzaguirre, to pilot an 18ft ski boat from Port Isabel, Tx through the winding intracoastal waterway to New York City and onto The Great Lakes. Their only qualifications being ambition and the wild streak to pull it off. He pulled off another adventure with Karen, John and Betty Fasano by recreating the Lewis and Clark Expedition a few years later. Jim was able to convince a few other friends to join them along the way - a testament to his salesmanship! For their entire married lives, Jim and Karen could be found attending sporting events, dance recitals, school events and drama performances. His love for his children and grand-children was always on display. A private, family service will be streamed via Facebook live on Wednesday the 29th at 2:00pm at St. John’s Episcopal Church in McAllen, TX. Visit the https://www.facebook.com/stjohnsmcallen/ to find the link. A drive by procession will take place at 7pm for anyone wishing to offer condolences. It will depart from St. John’s and pass by Jim and Karen’s home. The family will be available outside the home from 7-9pm if you can’t make the procession. In lieu of flowers, memorial contributions can be sent to St. John Episcopal Church, where the funds will be split between the National Multiple Sclerosis Society and the St. John´s Food Pantry.

James Glenn Henderson, born on June 17,1943, passed away of natural causes at 77 years old, surrounded by his wife and children on July 23,2020. He was born in McAllen,Tx to Robert and Lujane Henderson. He graduated from PSJA High School, and... View Obituary & Service Information

The family of "Jim" James Glenn Henderson created this Life Tributes page to make it easy to share your memories.