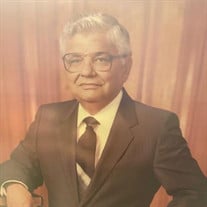 Jesus (Jesse) S. Trevino, age 95, died on Friday, September 3rd, 2021 surrounded by his loving family at McAllen Heart Hospital. He was born in Alice, Texas to Ascencio and Martina Trevino. Jesse proudly served in the U.S. Army/Air Force during World War II. After receiving an Honorable Discharge, he attended the University of Texas in Austin under the GI Bill and graduated with a Bachelor of Business Administration degree in 1950. Upon graduation he taught school for one year at Nayer Elementary in his hometown of Alice, TX. In May of 1950 during graduation, Jesse Trevino and Mary Lou Beltran became engaged and married on October 14, 1951. Jesse and Mary Lou were married for 69 years and he passed one month shy of their 70th wedding anniversary. They were blessed with two children, David Jesus Trevino and Laura Alicia Flores. Jesse Trevino was President/CEO of Jesse Trevino Insurance Agency Inc. for 52 years. He served as president of the McAllen Independent Insurance Agents Association and as a member of the Board of Directors of the Independent Insurance Agents Association of Texas. He dedicated his life to improving education for all students in South Texas enabling them to further their opportunities in life. This led him to serve on many educational boards. Jesse served as Chairman of the Board for Intercultural Development Research Association (IDRA) for 32 years. He was President of the McAllen ISD School Board, founding member of the Mexican American School Board Association (MASBA), Region 1 Education Service Center Board and Co-founder and Chairman of COSTEP. Jesse also served on the Executive Committee for Interest on Lawyer Trust Accounts. As a member of the McAllen Chamber of Commerce he was honored to receive the "Man of the Year" award in 1991. He also received the "Golden Eagle Award" from the RGV Hispanic Chamber of Commerce in 2013. He was always an active member in the Catholic Church. For more than 60 years he was a member of the Knights of Columbus where he became a Fourth Degree Knight and served on numerous boards and committees at Our Lady of Sorrows and Sacred Heart Catholic Church. His popularity came when he founded the legendary "Tripa Club". This was an avenue he used to network with fellow business men for more than 40 years. The Bi-annual gatherings were announced with a humorous letter that members looked forward to receiving. A wonderful time was had by so many over the years all because of Jesse's vision. Jesse was preceded in death by his parents, brother Fortino Trevino, New Orleans and sister Zulema Jackson from Montgomery, LA. He is survived by his wife of 69 years, Mary Lou Trevino. His children, David Trevino, Laura Flores (Agapito ) and grandson, Agapito Jesus Flores (McKenzie) and numerous nieces and nephews. In lieu of flowers, donations can be made to Our Lady of Sorrows Capital Campaign Fund, 1108 Hackberry Ave, McAllen, TX 78501 or the Vannie E. Cook Cancer Center Foundation, 101 E. Frontage Rd. McAllen, TX 78503. Visitation will be at Our Lady of Sorrows Catholic Church, 1108 Hackberry Ave. on Friday September 10, 2021 from 6-8 pm with a Holy Rosary to be recited at 7 pm. Funeral Service will be on Saturday, September 11, 2021 at 9 am at Our Lady of Sorrows Church. Reception to follow. Funeral mass will be live streamed on Our Lady of Sorrows Facebook page. Pallbearers will be Agapito B. Flores, Agapito Jesus Flores, Hector Lujan, Nolan Lujan, Danny Vela and Al Trevino. Funeral arrangements are under the direction of Kreidler Funeral Home.

The family of Jesus (Jesse) S. Trevino created this Life Tributes page to make it easy to share your memories.