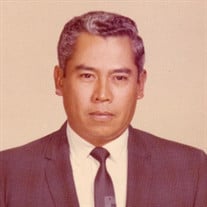 God called Jesse home on Friday, January 22, 2021. Lily, his loving wife of 63 years, and his devoted family were by his side. At the age of 89, he outlived his prognosis of advanced stomach cancer by seven months and was still willing to continue the fight; a man of grace and true grit! Jesse was born in Waelder, Texas in September 1931and always had rich memories of his childhood, growing up in that peaceful and wooded haven. His family moved to the Lubbock area in 1938, where he attended school in Meadow, Texas. From there, he entered St. Anthony's Seminary in San Antonio and continued studying for the priesthood with the Oblates of Mary Immaculate until 1953. Following his years in the seminary, Jesse served his country honorably in the United States Army as an artilleryman from 1953 to1955 A year later, Jesse began a long career in law enforcement by joining the Lubbock Police Department, being the first Hispanic to be employed under the Texas Civil Service System there. He joined the U.S. Border Patrol in 1960; one of only five Hispanics ever hired by that agency, up to that time. In 1967, Jesse was recruited by the United States Customs Agency Service, working international narcotics. In this capacity, Jesse was awarded a presidential commendation by President Richard Nixon in July 1972 "In recognition of exceptional service to others in the finest tradition of American law enforcement officers." In 1973, Jesse became a special agent for the Federal Drug Enforcement Administration, when the agency was formed. During his eight years with DEA, he worked numerous undercover cases, working closely with the Federal narcotics agencies in Mexico and, on several occasions, was assigned to foreign countries, mainly in Colombia, The Bahamas, and Yucatan. He also served as a Sky Marshall, guarding airline passengers traveling to Europe and the Middle East. During a visit to the U.S./Mexico border by President Lyndon Johnson, Jesse assisted in translating between the two countries. After his retirement in October 1981, Jesse became active in politics when he ran for the office of Sheriff of Hidalgo County in 1988. He continued being a vital part of the community as a member of the McAllen Chamber of Commerce, particularly in the International Relations Committee, often serving as translator on their exchange visits to Mexico. He served as an officer on the Board of Directors of the McAllen Palm City Lion's Club, the Knights of Columbus (Fourth Degree), for more than 25 years and the Serra Club of McAllen. He was also active in the McAllen Citizen's League, the Hidalgo County Historical Commission & Historical Society and was a devout member of Our Lady of Sorrows Catholic Church in McAllen. For a period of time Jesse was associated with Adame Translating Services and Davila and Associates translating, mainly court depositions, after which he established his own business: Torrez Translation Services. His next adventure led him to Izmir, Turkey, to accompany his wife to work at the American Collegiate Institute, where he volunteered as school counselor, helping numerous Turkish students obtain entrance into American Colleges and Universities. Throughout the years, the couple traveled to fifty-six countries around the world, including eleven in Asia, the Far East, Africa, and Cuba, where they had an audience with Fidel Castro. The visits to these eleven countries were made possible while working for the University of Virginia on "Semester At Sea", a multi-country, study-abroad program for college students; sailing around the world for 110 days. In addition to his wife, Lily, Jesse is survived by three children; Elizabeth Ann & husband, Israel Gonzalez; Mary Esther & husband, Patrick Brickley; and David Edward & wife, Karen Cannatela Torrez. He is also survived by seven grandchildren and 6 great-grandchildren. His sole surviving sister is Sister Mary Maxine Torres, a religious with the Missionary Catechists of Divine Providence in San Antonio and his brother, Robert & wife, Angelina Torrez. Other survivors include numerous nieces and nephews. He was preceded in death by his parents, Mucio and Enriqueta Quintero Torres, one sister, Guadalupe Torres and two brothers; Anastacio and Carlos Torrez. The family thanks Dr. Linda Villarreal of Edinburg and Dr. Restrepo of Texas Oncology for their care. In lieu of flowers, please consider making donations to the Serra Club of McAllen, Our Lady of Sorrows Catholic Church, the Palm City Lion's Club or the Knights of Columbus. Visitation will be Thursday, Jan. 28 at 9a.m. with a rosary at 9:30a.m. and Funeral mass at 10 a.m. Interment will be FRIDAY, Jan. 29, 2021 at 10 a.m. at the Texas State Veterans Cemetery.

God called Jesse home on Friday, January 22, 2021. Lily, his loving wife of 63 years, and his devoted family were by his side. At the age of 89, he outlived his prognosis of advanced stomach cancer by seven months and was still willing to continue... View Obituary & Service Information

The family of Jesse M. Torrez created this Life Tributes page to make it easy to share your memories.