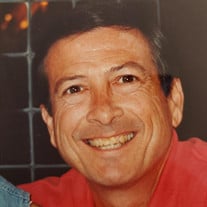 The clock of life is wound but once, And no man has the power To tell just when the hands will stop, At late or early hour. Now is the only time you own; Live, love, toil with a will Place no faith in 'tomorrow', For the clock may then be still. Jerry Lynn Leadbetter's clock went still on April 23 at the age of 81 after a seven month battle with pancreatic cancer. He was born in Donna, TX March, 26 1940 to Bill & Rita Leadbetter. He attended schools in Donna and upon graduation, entered the University of Texas at Austin. After graduating with a bachelor's degree in business administration, Jerry entered the US Army and served two years in Kaiserslautern, Germany as a transportation officer. Following his service, he remained in the reserves and retired as a Captain. After his military service, he returned to the Valley and began a career in banking at Mission State Bank and at McAllen State Bank. In the summer of 1965 he met, through a mutual friend, Tonii McDaniel. Tonii and Jerry became such good friends that she began setting him up with her girlfriends. None of them worked out and they realized they preferred each other's company. When asked by her friends what was "going on" between them, Tonii said "I don't know, but if he asked me to marry him, I'd say ' YES'". Jerry did so that year on New Year's Eve and they were married the following June of 1966. Their family became complete in 1971 when their son Jared was born. In 1976, the family decided to design and build a home. Jerry had so much fun with the undertaking, the seed was planted to change careers. Encouraged by his good friend and builder, Dick Moore, Jerry "retired" from McAllen State Bank and began his building business as Picasso Homes. Over the years, he partnered with other builders to develop and construct homes i n such neighborhoods as The Village, The Village North, Country Place and The Links. In recent years, Jerry remodeled older homes in McAllen, returning them to their former glory. Homebuilding was a true calling for him and he never looked back. During his building career as Jerry Leadbetter Builder, he served as President of the Hidalgo County Builders Association and on various committees and statewide boards for the Texas Builders Association. He also served on the planning and zoning committee for the city of McAllen and on the board for Habitat for Humanity. Jerry was also very active in First Christian Church (Disciples of Christ) McAllen. He served on the board under various capacities including Elder, Secretary and Chairman. He was also instrumental in the construction of the new church facility completed in 2016. He continued, until recent months, with overseeing the landscaping and maintenance of the church grounds. Jerry is survived by his wife Tonii; his son Jared and wife Chris; granddaughter Victoria Gerdes; nieces Kay Northcutt (Terri), Dee Dawson (Ron) and Amanda Wiltsie; nephew Adam Wiltzie; and sister-in-law Jennifer Wiltsie. Jerry never forgot a name or a face. When he wasn't working hard, he loved playing hard as well. He was one of the longest standing members of the Pocos Locos theatrical society and dearly loved taking part in many plays and parties. He was also a member of the McAllen Chamber of Commerce Greeters, which he served on for many years. Until a bad back kept him from playing anymore, he could be found playing golf with his son and his pals at McAllen Country Club almost every weekend. He loved hunting in the Davis Mountains of West Texas for mule deer and here in South Texas for white-tail deer, dove and quail. He only watched TV for the news, football or golf. He loved building things, most recently rustic patio tables out of old cedar fences. There wasn't much he couldn't fix which earned him the name 'HANDYMAN". He believed if you were going to do something, make sure it was done right. Otherwise, why do it at all? A celebration of life will be held at First Christian Church in McAllen on Saturday, May 8 at 11am. Visitation to follow in the fellowship hall afterwards. In lieu of flowers, the family asks donations be made in Jerry's name to First Christian Church McAllen.

The clock of life is wound but once, And no man has the power To tell just when the hands will stop, At late or early hour. Now is the only time you own; Live, love, toil with a will Place no faith in 'tomorrow', For the clock may then be still. Jerry... View Obituary & Service Information

The family of Jerry Lynn Leadbetter created this Life Tributes page to make it easy to share your memories.

The clock of life is wound but once,
And no man has the power
To...