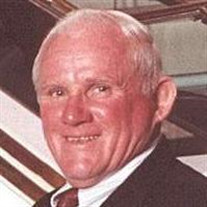 Jerome "Jerry" Ovid Beamsley, 79, died November 28th, at River Hills Health & Rehab in Kerrville, Texas, after an extended battle with various health complications. Jerry's childhood on the family farm led him to active participation in both 4-H and FFA, and the development of a lifelong interest in agriculture. Some of his fondest memories were of driving his tractor and maintaining his citrus orchard for over 32 years. Jerry graduated from Pharr-San Juan-Alamo {PSJA) High School in 1959. He went on to attend Pan American College. After college, he worked for a time with Valley Bearing Service in McAllen. Jerry later worked for Shell Oil Company as a Lease Operator in the oil & gas industry. For over 25 years, he was committed to serving the nation's growing energy demand for oil and natural gas. Even after retiring from his job in the oil industry in 1992, he managed to involve the "farm" style of living in his life. He continued working in the citrus industry and found great joy in delivering citrus to his friends and family while on road trips across the country. Jerry loved to travel with his wife Mary in their motor home across the nation and was always in search of the right antique gas engine or water pump. Along the way, he made friends that he would connect with forever. Jerry is survived by his loving wife, of 53 years, Mary L. Beamsley, son Kelly Beamsley, his daughter Jennifer Beamsley Niittula, son-in-law Richard Niittula, and precious grandchildren Derrian, Haleigh, and Paige Niittula. Jerry was preceded in death by his parents, Laurence and Thelma Beamsley, and older brothers Merwin, Ronald, and Leland Beamsley. He leaves behind brothers Bernard Beamsley (Ann) and Earl Beamsley (Ceciele), one sister, Joy Abney and numerous nieces and nephews. Visitation will be held at Kreidler Funeral Home Friday, December 6th from 6:00 - 8:00 p.m. Funeral services for Jerry will be held at 10 a.m. Saturday, December 7th, at Kreidler in McAllen. In lieu of flowers, donations may be made to the People's Covenant Church, 800 S. Standard Ave, San Juan, TX 78589.

The family of Jerome "Jerry" Ovid Beamsley created this Life Tributes page to make it easy to share your memories.