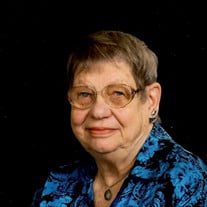 Jeanine Gillespie Died June 6, 2021 Jeanine Gillespie was born as Carol Jeanine Gross on April 25, 1933 in Temple, Texas. She passed away in McAllen, Texas on June 6, 2021 at the age of 88. Jeanine is preceded in death by her parents, Nita and Carl Gross. She is survived by her brother, James Gross (Shirley); husband Jon Gillespie; daughter Gail Blakeney; and son Jon Gillespie, Jr. (Kelly). Jeanine’s grandchildren were the center of her world. Each of the four grandchildren enjoyed their own exclusive week at “Camp Grandparents” every summer in McAllen, creating a strong bond with them. She was the beloved Grandmommy to Ryan Blakeney (Ila, deceased); Kathleen De Luca (Joe); Cameron Gillespie; and Allison Gillespie; and one great-grandchild, Isaac De Luca. Other family members include nieces Ann Calder (Daniel), Molly Dennett (Frank), Margaret Greenberg (Jason), Victoria Strong (William), Kathy Toner, and Elizabeth Withey-Vandiver (Chad); and nephews Reese Gillespie and Michael Gross. Jeanine graduated from Temple High School and attended Colorado Women’s College (1951-1953) and the University of Texas at Austin, where she earned a Bachelor of Science degree in Fine Arts, Radio/TV in 1957. She served as the student representative for Fine Arts and was recognized with the Outstanding Student Award. At UT Jeanine met Jon Gillespie. They married in 1955 and recently celebrated their 66th anniversary. After graduation they lived in Fort Lee, Virginia, and San Antonio, Del Rio, and McAllen, Texas, moving there in 1966. Jon’s work as a banker also took them to Raymondville and Marble Falls, Texas, for a short time in the 1980’s, then they returned to McAllen where they were welcomed back by old friends. Jeanine had a heart for service. She volunteered for many organizations that benefited greatly from her management and organizational skills, and where she formed many enduring friendships. She was a life-long member of the Zeta Tau Alpha sorority and served as President of the Zeta local alumni chapter. Jeanine was also a dedicated member of the P.E.O. Sisterhood, which provides educational opportunities and scholarships nationally for women. Over nearly five decades, she held all the offices in the local BV Chapter, including President. Jeanine also made major contributions, including holding elected offices, to the Junior Service League of McAllen, the Easter Seal Society, and St. John’s Episcopal Church, where she was a member since 1966 and served as the President of the Women of St. John’s. Jeanine was a Girl Scout troop leader in the late 1960’s and early 1970’s, also serving as a member of the Rio Grande Valley Council Board. Many of the girls from her Troop 13 are still best friends and think of “Mrs. G” as their second mother. When they reminisce about the old troop days, the infamous summer trip to Estes Park, Colorado often comes up. About halfway there, the old, battered school bus broke down in a one-phone town in the middle of nowhere, and it appeared the long-planned trip was over. Jeanine and Jon rallied the despondent scouts. They used that one phone to hire another bus with a driver, drove non-stop through the mountains at night, and got the troop to Estes Park for a life-changing experience. A memorial service for Jeanine Gillespie will be held on Saturday, July 10, at 10:00 a.m. at St. John’s Episcopal Church in McAllen, Texas. Kreidler Funeral Home is overseeing the arrangements. After the service, a reception will be held in the church fellowship hall. In lieu of flowers, donations may be made to the local chapters of Zeta Tau Alpha and the P.E.O. Sisterhood, or the Gwendolyn Strong Foundation whose mission is to cure Spinal Muscular Atrophy (SMA), which afflicted the late Gwendolyn Strong, daughter of Jeanine’s niece Victoria. The addresses for donations are: Deep South Texas Zeta Tau Alpha c/o Jennifer Lewis 5014 N. 15th Street McAllen, TX 78504 P.E.O. Scholar Awards 100 NW Greenbriar Square McAllen, TX 78504 Gwendolyn Strong Foundation 27 W. Anapamu St, Suite 177 Santa Barbara, CA 93101 nevergiveup.org

The family of Jeanine Gillespie created this Life Tributes page to make it easy to share your memories.