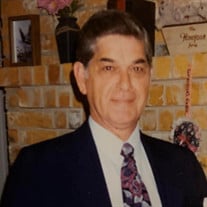 Javier (Jay) G. Hinojosa passed away at the age of 79 while at Doctors Hospital at Renaissance on Tuesday February 4, 2020. Jay was born on October 16, 1940 in Mercedes, Texas to Guadalupe and Manuela Hinojosa. Jay is survived by his wife Terri Lynn Hinojosa. He is survived by his children: Kimberly Lynn Hinojosa Trejo (Nathan), Tony (Stacy) Hinojosa, Tammy McNamara and Bryan Hinojosa, his stepson: Robert Geer (Rhonda), his grandchildren: Ayla Lynn Trejo, Elora Lynn Trejo, Ikaiya Lynn Trejo, Nikki Geer, Kaylee Geer. Jay also has five siblings: Maria Isidora (Dora) Hinojosa Garza (Alonzo), Oscar William Hinojosa (Yzelda), Moraima Hinojosa Adame (Jose), Omar Hinojosa (Maria), and Juan Jose Hinojosa (Catarina). Also surviving Jay are several nieces, nephews and cousins. He is preceded in death by his parents and sister, Moraima Adame. Jay graduated with the class of 1959 from Edinburg High School in Texas, and attended the University of Texas Pan American for Business Administration. Jay was also a Senior Airman in the Air Force at Mather Air Force Field in Sacramento. Most of his career was in retail management until his retirement at the age of 65. Jay married the love of his life, Terri, on July 15, 1973. They both traveled and spent time having fun with family and friends. In life he was the most loving husband, father and grandfather. He loved to laugh, joke around, and never met a stranger. Jay was always the life of the party. He enjoyed golfing and took the time to enjoy the sport any time he could. He was a devoted fan of the Raiders football team and always stuck by his team through winnings and losses. He always enjoyed the outdoors and loved to take long walks and sit outside to take in the beautiful weather. He always enjoyed spending time with his neighbors. Jay loved country music and enjoyed guiding his wife Terri and daughter Kim onto the dance floor every chance he got. Jay was diagnosed with Alzheimer’s many years ago. Terri stepped in to make sure he was well cared for and all his needs were met until his unexpected passing. Jay’s life was abundant and filled with much love, many friends, family travels, and a deep devotion to his faith. The family would like to extend a heartfelt thank you to their amazing family and friends for all their help, prayers and continued support during this very difficult time. A Celebration of Life will be Held on Monday, February 10, 2020 at Kreidler Funeral Home in McAllen from 6pm- 8pm with a prayer at 7pm In lieu of flowers, the family requests memorial contributions to be made to the Alzheimer’s Association to help find a cure for this horrible disease that affects so many people every day. Military honors will be conducted at a later date. To be announced.

Javier (Jay) G. Hinojosa passed away at the age of 79 while at Doctors Hospital at Renaissance on Tuesday February 4, 2020. Jay was born on October 16, 1940 in Mercedes, Texas to Guadalupe and Manuela Hinojosa. Jay is survived by his wife... View Obituary & Service Information

The family of Javier G. Hinojosa created this Life Tributes page to make it easy to share your memories.