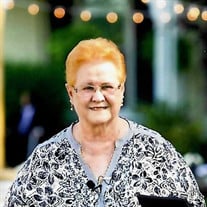 JANET BRYANT "Mom" DOYLE-AGE 72 died December 20, 2021. The Lord added this beautiful Angel to his Heavenly chorus to sing. She was born in McAllen, Texas and grow up in Mission, TX. She was proceeded in death by her parents, grandparents, uncles and aunts. Janet graduated from Mission High School in 1967, and married her one true love Larry yle in 1968, and was married to him for 53 years. She is also survived by a brother Gary and sisters Kandi and Melanie. Janet earned a BA, MA, Teaching certificate, and Supervisor certificate from Pan American University. She taught math at PSJA High School, then was Supervisor of UIL events for PSJA Secondary schools. She was awarded the 1996-97 UIL Southwestern Bell Excellence Award for her many activities in UIL. She loved coaching her hundreds of Prose and Poetry students over the years. These students became her "children" and they called her "Mom". She costumed about 100 plays with the Drama Department, first at PSJA High School and then at PSJA North High School. Janet retired from PSJA ISD in 2002 after 31 years. She worked at Nikki Rowe High School for 9 years after retirement, directing and costuming musicals with the wonderful choir department there. Thank you, Amby Tanner. Janet Joined the Magic Valley Chorus of Sweet Adelines International in 1998 and Barbershop music became her passion. She held many positions with Magic Valley chorus but enjoyed the singing and performing above all else. Janet loved entertaining her audiences with jokes and stories. She acted at the Tower Theater in Weslaco TX for many years, again loving the audiences and her fellow actors. She will be missed by husband Larry, her nieces and nephews and especially Dakota and Seth Brandt, also her best friend and traveling companion Carol Goodwin Carter, her Godchild Kendall and many of her "children" like Michelle, Monica, Nilsa, Karinna, Oscar, John, Romeo, Ophie and many others. A memorial service will be held at 10 A.M. on Saturday March 12. 2022, at Kreidler Funeral Home (314 N. 10th St., McAllen, TX.) In lieu of flowers the family hopes you will make a donation to the Janet Doyle Memorial Scholarship fund at PSJA Independent School District.

JANET BRYANT "Mom" DOYLE-AGE 72 died December 20, 2021. The Lord added this beautiful Angel to his Heavenly chorus to sing. She was born in McAllen, Texas and grow up in Mission, TX. She was proceeded in death by her parents, grandparents, uncles... View Obituary & Service Information

The family of JANET BRYANT DOYLE created this Life Tributes page to make it easy to share your memories.