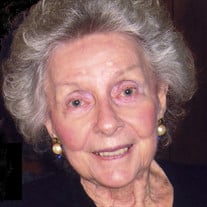 McAllen. Jane Louise Williams passed away on November 29, 2015. The daughter of Dr. and Mrs. Clarence Wellman, Jane was born January 23, 1922, in Oklahoma City, Oklahoma. Her father, a surgeon, instilled in her the love for nature. Her mother, Charlotte, taught her the beauty of the arts. While attending Oklahoma City University, she met her future husband, Robert G. Williams. During her husband’s 30-year career with the U.S. Air Force, Jane raised their five children while living in ten states as well as in Europe and Asia. As the wife of a pilot, Jane was well aware that she could be widowed at any time. Consequently she joined with other officers’ wives to develop the concept of housing to be made available to Air Force spouses and children after the member of the Air Force retired or died. Jane was also active in raising funds to purchase the property for this project, which became known as Air Force Village, located in San Antonio. After retirement from the military, Jane and Bob settled in McAllen. Jane remained active in community life, as a volunteer at IMAS and her church, and as author of the “Food for Thought” column in the McAllen Town Crier. She played tennis and golf, swam whenever she could, enjoyed playing the piano and mastered a variety of needlework techniques. She loved to take walks. Jane was a wonderful cook, collecting recipes from wherever they were stationed while in the military. She loved music and animals. Jane was a beautiful lady without being vain, a quiet, hard-working volunteer without seeking glory. She had a quick sense of humor and a practical nature. She was devoted to her family. She found her strength in God. Before her final illness she led an active life, taking yoga lessons, attending church, going out to lunch, doing crossword puzzles, playing cards with her provider and proudly authoring a cookbook containing her favorite recipes, also called “Food for Thought.” As was her wish, Jane died peacefully at her residence in McAllen. Jane was predeceased by her parents, her husband and a son, Charles E. (Buddy) Williams. She is survived by sons Robert and Wade, daughters Mary and Nancy, their spouses, seven grandchildren and one great-grandchild. Her remains will be interred with those of her husband and son at a service to be held at 1:00 p.m. on Tuesday, December 29, 2015, at Fort Sam Houston National Cemetery in San Antonio. No local services will be held. Kreidler Funeral Home is in charge of arrangements.

McAllen. Jane Louise Williams passed away on November 29, 2015. The daughter of Dr. and Mrs. Clarence Wellman, Jane was born January 23, 1922, in Oklahoma City, Oklahoma. Her father, a surgeon, instilled in her the love for nature. Her mother,... View Obituary & Service Information

The family of Jane Louise Williams created this Life Tributes page to make it easy to share your memories.