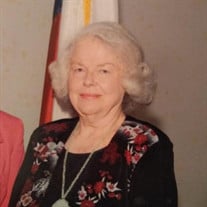 Jane Mitchell Talbot was born in White Plains, New York on August 4, 1935, to Catherine Cheatham Mitchell and Joseph C. Mitchell. Her family moved to Texas when she was a baby and she grew up in Highland Park, attending The Hockaday School in Dallas. After graduation, Jane earned a career degree from the Katharine Gibbs School in New York. She later graduated from Pan American University (UTRGV) with a degree in English. After graduating from the Katharine Gibbs School, Jane took a job with the American Cancer Society which caused her to move to the Rio Grande Valley. In that first year in the Valley, she met her future husband, Morgan K. Talbot (deceased), and the two of them were happily married over 50 years; living the remainder of their lives in McAllen. They had two sons; Mark Mitchell Talbot and Morgan Keith Talbot (deceased) and three grandchildren who she adored, Margaret Jane Talbot (deceased), Morgan Leslie Talbot and Lauren Abigail Talbot. Jane was incredibly active in her community serving in multiple non-profit organizations and civic boards. She was named as the Woman of the Year by the Women's Council of Realtors in 1988 and 1990 and served as president of that organization in 1988. Jane was named as the Outstanding Woman of the Year by the City of McAllen in 1976. She was honored with the President's Award by the University of Texas-Pan American Foundation and recognized as a Notable American in 1976 and 1977. She also served on the McAllen Planning and Zoning Board and the McAllen Library Board. Jane was a pivotal member of Junior League of McAllen serving for over 50 years. She was honored with several outstanding member awards (Lizzie’s) over her many years of voluntarism, leadership, and service. She was co-creator of the highly acclaimed and still sought after La Pinata cookbook initially published in 1976. Jane was an ardent supporter of the International Museum of Art and Science (formerly the McAllen International Museum); being involved in its original founding and helping to establish the museum gift shop. She was founder of the local Compassionate Friends Society and an active member of the Daughters of the American Revolution among other worthwhile and impactful civic organizations. One of the deepest joys of Jane’s private life was writing. While she attended Pan American University, she co-authored a book published in 1973 which serves as a literary guide to Latin American Literature. She later went on to write an ongoing series in the local newspaper, The Town Crier, called "Look Who's Cooking" which profiled many prominent members of the Upper Valley community including their biographical information and a favorite recipe. Jane was very active and interested in politics having served as the campaign manager for several successful local campaigns. She was an active member of the Republican party. Jane was also very active in her church life. She initially attended Our Lady of Sorrows Catholic Church, where she and Morgan were married. They later transferred to St John's Episcopal Church where she was involved for many years in all aspects of the church’s fellowship and leadership. Later in life, she and Morgan moved to First United Methodist Church where she was a member at the time of her passing. Finally, Jane always considered herself incredibly fortunate to have lived in McAllen and South Texas. Her many lifelong friendships were deeply cherished - from the close-knit neighborhood moms and her fellow Junior League volunteers to the many and varied associates in a plethora of civic, educational and professional organizations. Additionally, the impact Jane was able to make in her community and the appreciation she developed for her South Texas home’s history and future gave her life true meaning. Jane is survived by her son, Mark and grandchildren, Morgan and Abby; along with several nieces, nephews and cousins who have been very close and supportive of her family for many years. A visitation for Jane Mitchell Talbot will be held at Kreidler Funeral home on January 7, 2022 from 5:00 until 7:00 p.m. Funeral services will be held at First United Methodist Church in McAllen on January 8th, 2022 at 2:00 p.m. In lieu of flowers the family would ask that you consider making a donation to the Morgan and Jane Talbot Foundation at UTRGV, the International Museum of Art and Science or Easterseals Rio Grande Valley. Live streaming: https://www.youtube.com/channel/UClWPmYPhfYlOk0yynm2qCRg

Jane Mitchell Talbot was born in White Plains, New York on August 4, 1935, to Catherine Cheatham Mitchell and Joseph C. Mitchell. Her family moved to Texas when she was a baby and she grew up in Highland Park, attending The Hockaday School... View Obituary & Service Information

The family of Jane Mitchell Talbot created this Life Tributes page to make it easy to share your memories.