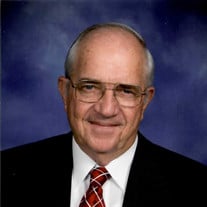 James Paul Hoffmann, 81, passed away on Thursday, May 20, 2021 at his home in McAllen. Jim was born in Sharyland in 1939 to James C. and Velma Hoffmann. Jim graduated from Edinburg High School in 1957, then attended Pan American College for a couple of years before transferring to Texas A&M University at College Station where he obtained his degree in Agronomy. Upon graduating from Texas A&M, Jim enlisted in the U.S. Army Reserve and served his military obligation with the Army Reserve and later with the National Guard. Jim began his first career in the Agricultural Chemical Industry going to work with Tide Agricultural Chemicals, whose headquarters was in Edinburg. He continued working with Wilbur-Ellis Co. who purchased Tide in 1989. After 34 years in the Agricultural Chemical Industry, Jim chose to take early retirement and devote his time to his citrus operation which he had previously established next to the family farm North of Edinburg. Jim became actively involved in the citrus industry, and its organizations. He served on the Board of Texas Citrus Mutual, and as its president from 2001 to 2003. Jim also served on the boards of Edinburg Citrus Association, Texas Citrus Producers Board, Texas A&M Citrus Center Advisory Board, Texas Citrus Pest and Disease Management Corp. Jim was crowned King Citrus LXXVIII of the 2015 Texas Citrus Fiesta. Jim is survived by his wife of 37 years Millie, his stepsons Mike Loesche and Chris Loesche, his grandchildren Michael Loesche, Kathryn Loesche, Abby Larumbe, Riley Loesche, and James Loesche, his sister Joan and her husband Bob Rogers, and Jim’s nieces and nephews Connie and Chris Stoner, Randy Rogers, Sharon and Chad Range, Tracie and Andrew Brown, and several great-nieces and great-nephews. In lieu of flowers, the family suggests donations be made to Our Lady of Sorrows Church in McAllen. Services are under the direction of Kreidler Funeral Home in McAllen. Visitation will be held on Tuesday, May 25, 2021 from 6pm to 8pm, with a rosary being said at 7pm. Mass will be held at Our Lady of Sorrows Church on Wednesday, May 26, 2021 at 10am. Interment will follow at 1pm at Valley Memorial Gardens.

James Paul Hoffmann, 81, passed away on Thursday, May 20, 2021 at his home in McAllen. Jim was born in Sharyland in 1939 to James C. and Velma Hoffmann. Jim graduated from Edinburg High School in 1957, then attended Pan American College for... View Obituary & Service Information

The family of James Paul Hoffmann created this Life Tributes page to make it easy to share your memories.