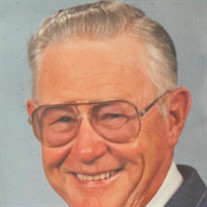 McAllen, Texas - James (Bud) Armand Clepper, 99, entered into rest on April 16, 2022. Born October 30, 1922 he and his six siblings grew up on a farm in the Texas Panhandle. Jim worked his way through West Texas State University (later West Texas A&M) working on the college farm milking cows. Jim earned a BS in three years and joined the Navy in 1943 as an officer. After completing a tour of duty in the Pacific during WWII Jim returned to marry Margaret DeWolfe in the spring of 1946. Jim met Margaret, a dental hygienist in the U.S. Navy WAVES program, in the Chicago USO on Christmas Eve 1944. They were happily married until her death in 2021. Jim and Margaret moved to Lubbock, TX where Jim earned a Master’s Degree at Texas Tech University. He taught high school Vocational Agriculture in Wheeler and Lubbock, TX. Later, Jim became a salesman in the animal health industry. He held sales or management positions with American Cyanamid in Texas, Georgia and Iowa until his retirement in 1987. The couple spent the rest of their lives in the Rio Grande Valley. Jim enjoyed a rich and full retirement. Golfing, gardening, volunteering and enjoying his grandchildren made him happy. He founded and, for several years, headed The Rio Grande Rose Society. Jim was especially proud of his work fundraising for the Rio Grande Children’s Home. A devoted Christian, even during the last years of his life at Alfredo Gonzales Texas State Veteran's Home, Jim watched three sermons every Sunday on television. Jim was predeceased by Margaret, the love of his life, three brothers and two sisters. He is survived by his sister, Juanita Parks, Georgetown, TX, his son, Douglas Clepper, DMD (Deanna) Augusta, GA, his daughters, Rebecca Clepper Sallans (Fran) Houston, TX, and Nyla Clepper Gordon, DDS Brownsville, TX, eight grandchildren and twelve great-grandchildren. Jim's loving family is grateful for the long healthy life he shared with us as a father, a grandfather and a great-grandfather. A memorial graveside service will be held at 2 o’clock, April 29 at the RGV State VetransCemetery in Mission, TX. Memorial contributions can be made to any children's charity in lieu of flowers. Inquire at Kreidler Funeral Home, McAllen, TX for further information.

The family of James "Bud" Armand Clepper created this Life Tributes page to make it easy to share your memories.