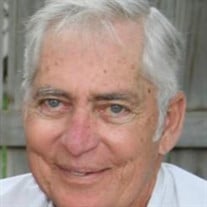 James (Jim) Clifford Bentley, 73, peacefully went home to the Lord, with his wife by his side, on Tuesday, February 22, 2022, at his home. He was born in McAllen, Texas in 1948 to Fred and Clova Bentley. After attending P.S.J.A. High School, he enlisted in the United States Army and proudly served his country in Vietnam. Soon after returning to the United States, he met Marsha May Wilson, his devoted wife, with whom he shared 50 years of marriage. At an early age, while visiting work sites with his father, Jim developed a passion for construction. This experience led to his successful operation of Alamo Systems, Inc. His building expertise enabled Jim to provide for his family and became a means for helping others and serving his community. Always involved in supporting their three daughters, Jim and Marsha volunteered as leaders for their Brownie Troop, 4-H Club, and as Vacation Bible School directors. He and his family were long time members of Pharr United Methodist Church where he built and dedicated the Family Life Center in honor of his mother. Jim was instrumental in the construction of the chapel at the Camp Thicket retreat center, where he and Marsha participated in the “Walk to Emmaus” spiritual journey. Although a man of few words, Jim had strong convictions and values, none more important than the love he had for his family. He was known as “Honey” to his wife, “Daddy” to his children, “Jimmy” to his siblings, and “Papaw” to his treasured grandchildren. Each role, unique and special, clearly reflects a man whose joy was most complete when surrounded by those closest to his heart. Jim was preceded in death by his parents Fred and Clova Bentley. He is survived by his loving wife, Marsha May (Wilson) Bentley; his daughters, Barbara (Matthew) Kelly, Michelle (Xavier) Rodriguez and Jamie (Frank) Enriquez; his siblings, Peggy (Cecil+) McKee, Freda (Dalton) Elam, Bob (Donna+) Bentley, Nita (Jim+) Phillips, Mary (Jack) McKeever, Jack (Tammy, Christa+) Bentley and Clo (Robert) Kotzur; his beautiful grandchildren, Hannah Elizabeth, Grace James and Dylan Joseph Kelly; Max Austin, Levi James and Maya Elena Rodriguez and Addyson Lea and Jonathan Frank Enriquez. Also surviving are numerous nieces, nephews, and extended family. The family will receive friends at Kreidler Funeral Home Chapel in McAllen on Sunday, February 27, from 5:00 to 7:00 p.m. A service will be celebrated on Monday, February 28, at First United Methodist Church in McAllen at 1 p.m., with interment following at Valley Memorial Gardens Cemetery in Mission, Texas. Anyone who wishes to honor Jim is requested to make a contribution to First United Methodist Church Day School, McAllen.

James (Jim) Clifford Bentley, 73, peacefully went home to the Lord, with his wife by his side, on Tuesday, February 22, 2022, at his home. He was born in McAllen, Texas in 1948 to Fred and Clova Bentley. After attending P.S.J.A. High School,... View Obituary & Service Information

The family of James Clifford Bentley created this Life Tributes page to make it easy to share your memories.