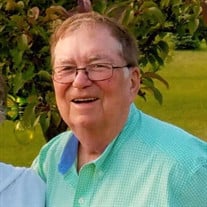 James Eugene Antonovich passed away peacefully on 12/12/2018. Jim was born March 8th, 1945 in Fargo, N. D. He grew up in the Amenia N.D. area and attended Amenia school. After graduation he joined the U.S. Navy for 3 years duty, 1963-1966. He worked for Bell telephone for a period of time, until he met his wife to be, Judy. They were married Feb. 7th, 1970. He then attended NDSU. Jim's career started in Washington, D.C. area, where he worked for the Marriot Corp. in their restaurant division. That led him across the country with stops at Indiana, North Dakota, Oregon, and Washington. After his retirement they moved to Texas after spending several winters there. Jim enjoyed hunting, fishing, reading many westerns, going to casino, and traveling, especially the trip on the Alaska Highway. He is survived by his wife of 48 years, Judy of Pharr, TX; a son, Anthony of Grand Forks, N.D.; a sister, Georgine (Eric) Dempsey of Blue Springs, MO; stepbrothers, Jay (Diane)Antonovich, and children, of Alborn, MN and Jeff (Mary) Antonovich of MN. Also surviving are his two 'little" girls, Sophie and Bella. Jim was preceded in death by his father, Joe Antonovich; mother, Florence Sell; stepfather, Wilbur Sell; and a nephew, Michael Pitman. Jim was a lifetime member of the V.F.W. and worshiped at Zion Lutheran Church in Alamo, TX, where he was a member. Services will be held at Zion Lutheran Church on 12/18/2018 at 11:00AM, with a greeting of friends prior at 10:30AM.

The family of James Eugene Antonovich created this Life Tributes page to make it easy to share your memories.