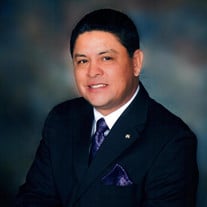 James (Jaime) Zapata, Jr, 60 passed away Monday, February 15, 2016. He was born in Weslaco, Texas and was a State Farm Agent, CLU. He is survived by his wife, Sylvia Zapata of McAllen; three children, James Zapata III of Austin, Texas, Roberto Zapata of Houston, Texas, and Victoria Zapata of Austin, Texas; his father, James Zapata, Sr. of Weslaco, Texas; his brother, Armando Zapata of Pflugerville, Texas; and a sister, Virginia Charles of Weslaco, Texas. He was preceded in death by his mother, Teofila Zapata of Weslaco, Texas. Mr. Zapata will lie in state today, February 18, 2016 from 6 PM to 8 PM with a Rosary being recited at 7 PM at Kreidler Funeral Home, Inc. The Funeral Mass will be celebrated at 10 AM at Our Lady of Perpetual Help on Friday, February 19, 2016. Entombment will follow at Roselawn Mausoleum. kreidlerfuneralhome.com

The family of Jaime Zapata created this Life Tributes page to make it easy to share your memories.