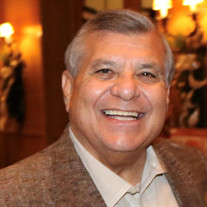 Jaime Villarreal, 74, joined his wife, Sylvia, in eternal rest on December 10, 2020 in McAllen. Jaime was one of seven children born in McAllen to the late Adalberto and Eduvijes Villarreal. Jaime moved to Dallas in 1964 to pursue a career in aircraft maintenance. He married the love of his life, Sylvia, in 1974. Jaime was a member of the Army National Guard in his early years. He worked his way up the career ladder from aircraft mechanic to sales manager of the aircraft parts division where he spent many years traveling to visit clients, primarily in Mexico and South America. In 1999, Jaime retired from the aeronautic industry and he and Sylvia moved back to McAllen to be closer to family. Jaime joined his brother in law and sister in law at Danny’s Pawn & Sporting Goods where he worked until his passing. He was an active member of Our Lady of Sorrows Church and the O.L.S. A.C.T.S. community. Jaime enjoyed watching FOX news and was always ready to strike up a conversation about current events and politics. He loved watching Dallas Cowboys’ and Texas Aggie football where you could hear him coaching loudly from the couch. His sarcasm and colorful vocabulary were sure to make everyone around him laugh. Jaime was a great husband, father, grandfather, brother, uncle, compadre and friend. Jaime was preceded in death by his parents, his beloved wife, Sylvia, his brothers, Jorge Villarreal and Carlos Villarreal and his nephew, Javier Jaime (J.J.) Villarreal. Left to cherish Jaime’s memory are his daughter, Cassandra Lea Villarreal (Jorge Espinoza), his grandchildren, Sebastian Reyes and Kennedy Reyes, his sister, Irma Mascarenhas, his brothers, Hector (Alicia) Villarreal, Ramiro Villareal and Rudy (Debbie) Villarreal and numerous nieces, nephews, great nieces and great nephews. Funeral Services are entrusted to the care of Kreidler Funeral Home. Due to COVID restrictions, there will be a private family burial service. Pallbearers will be his brother, Hector Villarreal, his grandson, Sebastian and his nephews, Gene Mikulik, Trey Mikulik, Blake Hensler, Daniel Gallegos, Jr. and Christopher Gallegos. In lieu of flowers, please consider a donation in Jaime’s name to Vannie E. Cook, Jr. Children’s Cancer and Hematology Clinic at 101 West Expressway 83, McAllen, Texas 78503 or by calling Victoria Guerra at 956-661-9840.

Jaime Villarreal, 74, joined his wife, Sylvia, in eternal rest on December 10, 2020 in McAllen. Jaime was one of seven children born in McAllen to the late Adalberto and Eduvijes Villarreal. Jaime moved to Dallas in 1964 to pursue a career... View Obituary & Service Information

The family of Jaime Villarreal created this Life Tributes page to make it easy to share your memories.