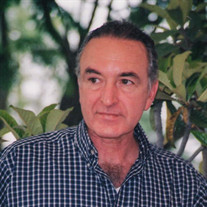 Jaime Leonel Lopez Garza, 76, died December 15, 2020, in McAllen, Texas. He died peacefully at home in the loving embrace of his wife and children. Jaime was born in Reynosa, Mexico, in 1944 to Dr. Jose Lopez Araujo and Elodia Garza de Lopez. He graduated from the Universidad Autonoma de Nuevo Leon in Monterrey, Mexico, as an Economist. Soon after, he began working for Coca-Cola Export Corp in Mexico and quickly rose through the ranks, becoming the Director of Operations for the company. Coca-Cola gave Jaime the greatest gift, he met his wife there, they married and had three children. After his retirement from Coca-Cola, Jaime moved his family to McAllen, Texas, and opened businesses on both sides of the border. Jaime loved helping others and being a great host. He was known for being a true gentleman. He was warm, kind, honest, quiet and a spiritual man of great faith. Jaime is preceded in death by his parents and his brother Guillermo Lopez Garza. He is survived by his wife, Maria Celia, his children Ana Celia (Armando), Jaime (Gloria) and Monica (Michael), and his four granddaughters. Jaime is also survived by his four siblings that he loved dearly: Dr. Jose Lopez Garza, Elodia Lopez de Gomez, Lupita Lopez Garza and Hector Lopez Garza, and many cousins and nephews. A private funeral mass to celebrate his life will be held Saturday, December 19, 2020, at Our Lady of Sorrows Church. Due to the pandemic, there will be no reception following the funeral service. The mass is strictly for family and will adhere to social distancing and mask requirements. The mass can be viewed via livestream at https://youtu.be/vNRKy_EO2lk on Saturday at 9 a.m. We would like to thank the nurses and staff of Contigo for their daily home visits, care, and their loving way of treating him.

The family of Jaime Leonel Lopez Garza created this Life Tributes page to make it easy to share your memories.