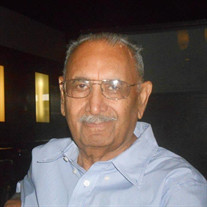 Mr. Jagdish Kanwar was born on September 29, 1930 in Peshawar, Pakistan (then British India). After the partition of India and Pakistan in 1947, Mr. Kanwar and his family was forced to flee to India. He ended up in Calcutta with a job at the Reserve Bank of India in 1947. He also went to college at night. He was the first person in his family to graduate from college with a degree in Economics and Commerce from Punjab University in 1952. He married Prakash Suchdev on May 25th, 1957. They lived in New Delhi for six years during which time they started a family and firmly entrenched a life together that would last close to 45 years. In 1963, the course of their life would be greatly shaped when Mr. Kanwar unexpectedly received immigration to Canada. He arrived to Toronto in November of 1963, and was joined by his wife and three children in April of 1964. He received his first accounting job in Toronto in April of 1964 with Massy Fergusson corporation, and was promoted and sent to Des Moines Iowa in 1967. Mr. Kanwar and his family were among the first permanent Indian residents of the state of Iowa. He helped start the Indian Association for the State of Iowa, and a spiritual man, helped start the Sikh Religion Association there as well. In 1982, he changed positions and was transferred to McAllen, Texas. He started working for Pioneer Seed in International Finance and as a Comptroller for Latin American Operations, and continued that position until his retirement in 1990. Mr Kanwar never really retired and remained active his entire life. After retirement from corporate life, he became an entrepreneur and real estate investor, owning both businesses and properties. He became involved in civic affairs and in the Indian community of the Rio Grande Valley becoming a founding member and eventually President of the Indian Association of the Rio Grande Valley. He was also a founding member of the Sikh Association of the Rio Grande Valley. Finally, the last 15 years of his life he was also a devoted volunteer at Edinburg Regional Medical Center. He now joins his wife, Prakash; mother, Ram Pyari; father, Ajab Singh; brother, Khem; and sisters, Harbans and Harjit. He is survived by brothers, Gurbachan, Jaipaul, and Bhupender; sisters, Amrit and Manjit. His children, Maninder Kanwar, Kanwaljit Kanwar, Manmit Locke, and Davender Kanwar also survive him. Finally, there are his ten grandchildren Jay, Anna, Thomas, Margaret, Ruchi, Amrita, Meeta, Kali, Vishaka, and Davender . Mr. Kanwar overcame great challenges, was a world traveler, a gentleman, and a father figure and friend to so many. He was so full of love and was so loved in return. Visitation will be held on Saturday, November 18, 2017 from 10:30 am to 2:30 pm at Kreidler Funeral Home.

Mr. Jagdish Kanwar was born on September 29, 1930 in Peshawar, Pakistan (then British India). After the partition of India and Pakistan in 1947, Mr. Kanwar and his family was forced to flee to India. He ended up in Calcutta with a job at the... View Obituary & Service Information

The family of Mr. Jagdish Kanwar created this Life Tributes page to make it easy to share your memories.