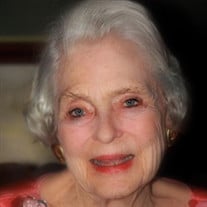 Jacqueline Casteel Jones left her earthly life peacefully on the 8th of April in her McAllen, Texas home and city of residency since 1948. Jackie was born to Wiley Elmer Casteel and his wife Mae June 7th, 1926 in El Paso, Texas. Following high school there, she attended Columbia Christian College in Missouri for a year and then matriculated at the University of Texas in Austin. While a student at the University, she met Jim Jones from McAllen. A romance and marriage ensured. Jim’s parents created a retail enterprise in McAllen, Jones and Jones, to which the young couple returned becoming involved in its next 50 years of development. She and Jim used their complimentary abilities to mold the retail endeavor to set the standard for exquisite taste and exceptional items in the field of fashion, fine jewelry, home furnishings and all that supported a distinguished lifestyle for citizens of the valley and afar. Jackie provided a shining example as a wife, mother, friend and citizen of her community and state thereby serving as Jim’s distinguished partner while raising Jones and Jones to well-deserved notoriety. Jackie was predeceased by her parents Wiley and Mae Casteel, her brother Sonny, and sister Martha Barrett and Martha’s husband Bob. Surviving is niece Beverly (spouse Ted, and their children Kelly, Amy and Jill). A nephew Robert Barrett also survives. Jackie was predeceased by Jim after a marriage of five decades. They produced two children, James L. Jones, Jr. and Jill Jones Smith. Their son Lan expired in 2013 but is survived by his wife, Mary Vance Tolson Jones, and their daughters Casteel and Mary Landon and their respective spouses (William and Carlos and children). A son James L. Jones III (Tres) expired in 2010. Jill’s spouse is Dr. J. Marvin Smith III. Married in 1981, their children are John M. Smith IV, Alexa Landon Moore, spouse Dr. Chance Moore, (two daughters Cameron and Landon) and Jacquline Jones Smith all residing in San Antonio. Jackie, affectionately called Mumsie by her children and grandchildren, was a beautiful and kind lady who was both ingratiating and inspiring to those who knew her. She made all those she touched enriched by her human and loving soul the better for having known her. Her warmth inspired others to emulate her loving ways as a mother, wife, grandmother, aunt and dear friend. Her long and fruitful life touched many, both family and friends by her warm spirit and example. Jackie and Jim were supporters of the endeavors in the valley to make it a better place to live. As regards thoughts for a memorial, it is suggested that one might consider the Vannie E. Cook, Jr. Cancer Foundation, 101 West Expressway 83, McAllen, Texas 78503. A future celebration of life memorial service for Jackie is being planned. The family is indeed grateful for the devoted care that Jackie received from: Lourdes Ortiz de Martos, Judy Lozano, Nora Garcia, Rita Tuttle, Veronica Lozano and Vicky Gomez. Elara Caring Hospice directed her terminal care expertly with notable compassion.

Jacqueline Casteel Jones left her earthly life peacefully on the 8th of April in her McAllen, Texas home and city of residency since 1948. Jackie was born to Wiley Elmer Casteel and his wife Mae June 7th, 1926 in El Paso, Texas. Following... View Obituary & Service Information

The family of Jacqueline Casteel Jones created this Life Tributes page to make it easy to share your memories.