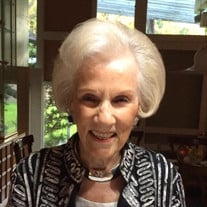 Jacqueline (Jackie) Pride, age 90, died on June 16, 2017 in McAllen, climaxing a life filled with family, music, and the arts. Mrs. Pride was born in Wooster, Ohio in 1926 to Vincent and Dorothy More Morris. Having studied violin and piano from an early age, she graduated from Wooster College with a bachelor’s degree in music performance and from the University of Texas-Austin with a master’s degree in music. In 1951, she married Woodbury Pride and they moved to the Valley. Making her wish known to begin a program of strings in the public schools, she was hired to initiate the Edinburg ISD String Project in 1952. After successfully launching and supervising that program for four years, she opened a violin and piano studio in McAllen. In 1962 she became an elementary music specialist in the McAllen ISD. After many years of ardently petitioning for an orchestral string program in the district, she became the founder and first instructor of the McAllen String Program in 1979, with her first seven students achieving mastery and succeeding in statewide competitions after only three years. Through her initial efforts, the program today has an enrollment of 1,000 students. 1982 saw her appointed as coordinator of elementary music and strings for the McAllen ISD. She finished her long service to education by serving as director of fine arts for the district from 1991 to 1994. Along with her teaching career, Mrs. Pride maintained her status as a professional violinist, serving as the concertmaster and assistant concertmaster of the Valley Symphony Orchestra for 17 years. She soloed with the San Antonio Symphony Orchestra and was named Texas Orchestra Director of the Year in 1993 by the Texas Orchestra Directors Association. The late Dr. Carl Seale, musical conductor of the Valley Symphony Orchestra for 30 years, once stated, “We who are involved in music in the Rio Grande Valley owe a great deal to Jackie Pride. She had a vision for developing a love of orchestral music in our area. The fact that we have a permanent mature orchestra made up of fine local musicians is in large part due to her passion and effort.” The entire city of McAllen celebrated her dedication and achievements by declaring May 18, 1997, as “Jackie Pride Day.” Mrs. Pride enjoyed traveling and attended international string workshops in Hawaii, Austria, and Italy. During summers and holidays, she also traveled for pleasure to Africa, China, and Alaska. Along with her career as a professional violinist and teacher/administrator, she was a consummate quilter, designing and executing exquisite wall hangings, table pieces, and bed linens. At the time of her death, she was a dedicated member of the First Presbyterian Church Quilting Ministry, contributing actively despite her struggle with Parkinson’s Disease. In addition to her parents and her brother Dr. Roger Morris, Mrs. Pride was preceded in death by her husband, Woodbury F. Pride, who died in 1982. She is survived by her daughters Peggy Pride Fodness of New Braunfels, Paige Pride Wilmot of McAllen and son Woody F. Pride (Kristy) of St. Louis, Missouri. Her grandchildren include Shane Fodness, Elise Spratlen, Erin Fineberg, Joshua Wilmot, and Michael Pride. Also left to enjoy her memory are five great-grandchildren, three nieces, and two nephews. A celebration of Jackie Pride’s life will be held on Friday, June 23 at 5:00 p.m. at the First Presbyterian Church, 104 South 12th St., McAllen. Kreidler Funeral Home is in charge of arrangements. Donations honoring Mrs. Pride’s life may be made to the McAllen Music Club, c/o Mrs. Donelda McKeand, 1900 Camellia Ave., McAllen, Texas 78501.

Jacqueline (Jackie) Pride, age 90, died on June 16, 2017 in McAllen, climaxing a life filled with family, music, and the arts. Mrs. Pride was born in Wooster, Ohio in 1926 to Vincent and Dorothy More Morris. Having studied violin and piano... View Obituary & Service Information

The family of Jacqueline (Jackie) Pride created this Life Tributes page to make it easy to share your memories.