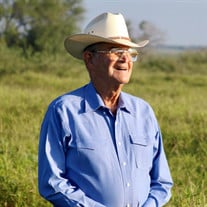 For the past 70 years, Jack Scoggins, Sr. would depart his house at 4:40am to begin his workday. On January 27, 2021, in McAllen, Texas, at age 87, Jack departed at 4:40am yet again: this time into the arms of his Lord and Savior Jesus Christ. Jack... View Obituary & Service Information

The family of Jack Scoggins, Sr. created this Life Tributes page to make it easy to share your memories.

For the past 70 years, Jack Scoggins, Sr. would depart his house...