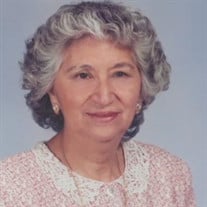 Irma V. Bedinghaus (90) was called to her heavenly home on Thursday, November 4, 2021, surrounded by her loved ones at her son’s home in McAllen, Texas. Irma was born in Laredo, Texas on September 3, 1931, to Gabino and Elvira Viera, and was raised in Laredo as a child, until the family moved to Corpus Christi, Texas. She was married to Ruben Y. Cavazos in March of 1951, and they had six (6) children; Ruben, Ruth, Rachel, Rosalie, Robert, and Rene. In January of 1986, Irma married Lawrence Bedinghaus, and was married to him until his death in 2002. Irma was preceded in death by her husband, Lawrence Bedinghaus, son Robert Cavazos, daughter Ruth Mata, her brothers - Juan Viera, Gabino Viera, David Viera, Samuel Viera, and infant Jose Viera; her sisters - Amelia Bernal, Dolores Moreno and infant Juanita Viera. She is survived by sisters Lydia Vargas and Mary Viera of Corpus Christi, Texas; her sons - Ruben (Diana) Cavazos of McAllen, Texas; Rene (Lori) Cavazos of Frisco, Texas; and son-in-law, JC Mata (Ruth (dc’d.) of McAllen, Texas; daughters - Rachel (Dan) Stasny of Sweet Home, Texas, Rosalie (David) Reast of Kerrville, Texas, daughter-in-law Cris (Robert (dc’d.) Cavazos of McAllen, Texas; and stepsons – Lawrence O. (Carolyn) Bedinghaus of McGregor, Texas; and Ronald L. (Lolli) Bedinghaus of Austin, Texas. Irma has 21 grandchildren, 21 great grandchildren, 2 great-great grandchildren and numerous nieces and nephews. After raising her family, and 26 years after graduating from high school, Irma entered Pan American University where she earned her bachelor’s degree in education and became a teacher. Irma then taught 3rd grade for 13 years for the La Joya I.S.D., where she thoroughly enjoyed being with and teaching children; whom she generously made a part of her extended family. Irma had a very special Gift of Service, and was always busy serving others throughout her entire life. She was a faithful servant to her church and took great pleasure at being involved in many of their activities. She was a sponsor and chaperone of the Methodist Youth Fellowship and a member of the United Methodist Women. Irma was a Sunday School and Vacation Bible School teacher, worked tirelessly with the Methodist Food Pantry and Clothing Drive, and with programs at the Campus Ministry Department at Pan American University. In the evenings, Irma nobly taught English classes to adults and sponsored her students in obtaining their GED certificates. In addition, she taught Citizenship classes and helped her students become U.S. Citizens. Irma also ministered Christ’s love and volunteered at the Comfort House in McAllen, Texas. A Memorial Service will be held at her beloved church of 58 years, El Divino Redentor United Methodist Church, located at 2421 West Maple Ave., McAllen, Texas, on Saturday, November 20, 2021. Visitation will begin at 10:00 am and the service will begin at 10:30 am. In lieu of flowers, donations may be made to “El Divino Redentor United Methodist Church” at 2421 W. Maple Ave., McAllen, TX 78501.

Irma V. Bedinghaus (90) was called to her heavenly home on Thursday, November 4, 2021, surrounded by her loved ones at her son&#8217;s home in McAllen, Texas. Irma was born in Laredo, Texas on September 3, 1931, to Gabino and Elvira Viera, and... View Obituary & Service Information

The family of Irma V. Bedinghaus created this Life Tributes page to make it easy to share your memories.

Irma V. Bedinghaus (90) was called to her heavenly home on Thursday,...