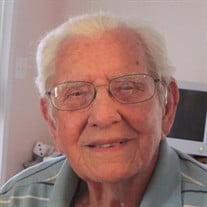 Hugh Wesley Mitchell, 99, passed away on December 16, 2016 peacefully in his sleep at River City Care Center in San Antonio, TX. Anna, his beloved wife of 73 years, preceded him on their journey to be with our Lord on May 12, 2012. Hugh was born April 03, 1917 to Dwight and Nancy (Bingham) Mitchell in Keith Township, Wayne County, Illinois. The family moved to Lawrenceville, IL, where Hugh lived for over 80 years, before moving permanently to Mission, TX in 2010. He met and married Anna B Walters, the love of his life, in Lawrenceville on April 9, 1939. Hugh worked at the Lawrenceville Central Cigar and Candy Company after he graduated from Lawrenceville Township High School and returned there to work after WWII until retirement in 1983. They were members of the First Christian Church in Lawrenceville where he served as a Deacon. Hugh was very proud to be a WWII Veteran. He was drafted into the U.S. Army June 1, 1943, and did his basic training at Fort Custer, Battle Creek, MI. He was transported to the European Theater of War on the U.S.S. Wakefield to Camp Lucky Strike in Janville, France, where he joined his unit, the 899th Tank Battalion, and entered the Battle of the Bulge where he was wounded. He saw continuous action throughout Europe and advanced to the rank of Staff Sergeant, Tank Commander, under General Omar Bradley until the end of the War. He was honorably discharged April 13, 1946, at Camp McCoy, WI, and returned to Lawrenceville. He is survived by his son, Hugh Bruce; grandchild, Shannon Marie Mitchell; and his five great-grandchildren. There will be no memorial service at this time. The family needs to arrange for Hugh and Anna to be transported to Lawrenceville to rest in peace with the rest of the Mitchell and Walters’ family members at rest where they can begin their eternal life together. In lieu of flowers, donations can be made in Hugh’s honor to the Wounded Warrior Project. (https://www.woundedwarriorproject.org/)

Hugh Wesley Mitchell, 99, passed away on December 16, 2016 peacefully in his sleep at River City Care Center in San Antonio, TX. Anna, his beloved wife of 73 years, preceded him on their journey to be with our Lord on May 12, 2012. Hugh was... View Obituary & Service Information

The family of Hugh Wesley Mitchell created this Life Tributes page to make it easy to share your memories.