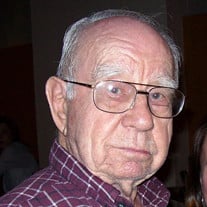 Hugh W. Calvert passed away peacefully at home on January 19, 2017, at the age of 98. He was born September 12, 1918, in Brady, TX,, the son of Paul and Zuma (Long) Calvert. After high school, Hugh attended Texas A&M University, was in the Aggie Corps, and graduated in 1940 with a degree in Hydraulic Engineering. Hugh took a job with the International Boundary and Water Commission (IBWC) in El Paso, TX. It was there he met and married, Mary Jean Moore, in 1941. After the Pearl Harbor attack, he joined the Army and served in WWII as a 1st Lieutenant in the 112th Cavalry in the Pacific Theater earning the Bronze Star Medal and Purple Heart. After the war he worked for the IBWC in San Benito, then for his father-in-law at Eddy County Abstract Title Company in Carlsbad, NM, and finally he returned to the IBWC and resided permanently in McAllen, TX. Hugh was a wonderful husband, father, grandfather, friend, and was one of the kindest people you would ever know. He was witty, fun-loving, and had a mischievous sense of humor. He loved his family, friends, horses, dogs, puzzles, guns, and all things Aggie. Hugh will be dearly missed by all who knew and loved him. Hugh is survived by his son, Mike Calvert (Vickie), of El Paso, TX, daughters Deborah Groves (Gary), of McAllen, TX, Marylee Alaniz (Steve), of McAllen, TX, daughter-in-law, Carole Calvert, of Guyton, GA, six grandchildren, Kelly Schulz (Randy) of Cheyenne, WY, Bobbie Jo Fossberg (Wayne) of Las Cruces, NM, Christopher Calvert (Cari) Oregon City, OR, Joshua Calvert (Steph) of Guyton, GA, Matthew and Cameron Alaniz, of McAllen, TX, seven great-grandchildren, Sammantha Schulz, Mike Schulz, Mattie Fossberg, Syndie Fossberg, Phil Calvert, Joy Calvert, and Liberty Sue Calvert, as well as numerous nieces and nephews. In addition to his parents, Hugh was preceded in death by his wife, Mary Jean, son, Philip Calvert, his siblings, Cecil Calvert, Charlotte Calvert, and Gloria Herberg. The family extends a special thank you to Hugh’s caregivers, Tony and Mari Soria, Minnie Cenovio, and Azenett Garcia, for their dedication and compassion the last six years. A service with military honors will be held Friday, January 27, 2017, at 11:00 a.m. at the Veterans Cemetery in Mission, TX. In lieu of flowers, those who wish to remember Hugh may make gifts in his memory to The Association of Former Students, Texas A&M University, 505 George Bush Dr., College Station, TX 77840-2918, (979) 845-7514.

Hugh W. Calvert passed away peacefully at home on January 19, 2017, at the age of 98. He was born September 12, 1918, in Brady, TX,, the son of Paul and Zuma (Long) Calvert. After high school, Hugh attended Texas A&M University, was in the... View Obituary & Service Information

The family of Hugh White Calvert created this Life Tributes page to make it easy to share your memories.

Hugh W. Calvert passed away peacefully at home on January 19,...