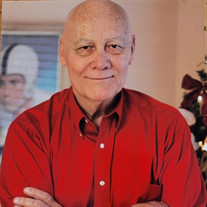 Herbert Sidney Richmond, “Poppi” to his family, earned his wings in the early morning hours of July 23, 2021. He passed away peacefully in his sleep with his daughter at his bedside, holding his hand. He was 84 years old. He was preceded in death by his wife, both of his parents, and his three brothers. He is survived by his immediate family as well as extended families, including nieces and nephews. Herb, as he was called in his adult years, was born on November 22, 1936 in Tampico, Mexico and was raised in McAllen, Texas. He is a graduate of the class of 1955 from McAllen High School and always took great pride in what he considered to be his hometown roots. He later received his undergraduate degree and teaching certificate from Texas A & I in Kingsville. In February of 1960 he met his first love, Sandra Jean Matthews of Bishop, Texas. They eloped on July 9, 1960 and later married at St. Paul's Lutheran Church in Kingsville, Texas on September 9 of the same year. They celebrated their 50th wedding anniversary before she passed away in the summer of 2010. Together they had three children, two sons and a daughter. Their oldest son, Ric Rich Richmond (of San Antonio) married Sandra E. Arias and gave Herb his first granddaughter, Roxanna Rae Ricci, and they also later had her last grandchild and only other granddaughter, Rosalynda Sidney. Three years later Herb and Sandra gave birth to their second child, Ron Royal Richmond (of Houston). Ron married Kelly Lynn Greer. Together they gave birth to Cody Ryan Richmond. Cody is now grown and married to Halie Appelgate Richmond. Together they have given Poppi his only two great-grandchildren, Judge Archer and Emmett Kelly Richmond. Still four and a half years after Ron was born, Herb and Sandra gave birth to their youngest child and only daughter, Rana Renee Roxann (of McAllen). Renee married and gave birth to Sandra's oldest grandson, Colton Richmond Pugh who married Abby Pepin. They now reside in Michigan. Just 19 months later, she had Christopher Eulin Thomas Pugh, who is engaged to Lillian Violet Xiaoying Aguilar, both residents of San Antonio. After Sandra’s passing, Herb built a life with Hilda G. Lara of McAllen. Together they celebrate her two children and their families, all residents of McAllen. The oldest is Augustine “Tino” Lara and his wife, Ester Lara. Together they have three daughters: Vivian, Victoria, and Vianca. Maritza Lara Perales married Sergio Perales and have children: Jacob, Desiree, Homer, and Isaac. Together, Herb and Hilda celebrated all of their children, grandchildren, and now great-grandchildren. His presence on Earth is missed by all who love him and call him Dad or Poppi. Herb started his teaching and coaching career at Travis Junior High (now Travis Middle School) in McAllen. He spent many years as a successful coach at La Feria High School where he is remembered fondly before leaving the RGV for Hays CISD and the Texas Hill Country. He was happiest with family and in the sports arenas. He was always proud of his children and grandchildren, and it was not uncommon to see him under the Friday night lights, in the gym bleachers, or in an auditorium cheering on one of his children or grandchildren while he was able to do so. Coach Richmond preferred that no services be held. Instead, he chose to be cremated. The family will have private remembrances in his honor sometime in the future. If you would like to honor Coach Richmond and his memory, you may do so by making a donation to a scholarship fund that has been set up in his name at McAllen High School. Donations may be dropped off directly at the school with the bookkeeper or made online. Directions to follow here. The family wishes to thank all who have reached out with their love and support. It has truly meant a lot in their time of need. For anyone wishing to donate to the McAllen High School Scholarship in his memory, we have included the directions below. If you are in the McAllen area, you can stop by the high school and donate directly in his name with the bookkeeper, L. Ragsdale. Any amount is greatly appreciated. McAllen High School is located at 2021 La Vista in McAllen, TX. 78501 1. Go to the official McAllen ISD – Online Store page: Campus Store | McAllen Independent School District (mcallenisd.org) 2. For all guests wishing to donate, click on the “Guest” icon 3. Create an account to register with the District, then select “sign up” 4. Once an account has been created, the following screen will be prompted, then select “Items At All Schools” 5. Select High School under school type, then “001 McAllen High School" 6. Then select the Richmond Scholarship category 7. Enter the amount you wish to donate to the Herbert S. “Herbie” Richmond Scholarship and click on “Buy” 8. Total donated funds will be added to the basket, then select “Checkout 9. Then review your cart. If correct, select check out and proceed with the payment process. 10. Complete the following information for online payment. 11. Once transaction has been completed, an online receipt will be generated. Thank you so much for your donation on behalf of our beloved Dad, Poppi, husband, and friend. Renee Richmond

Herbert Sidney Richmond, &#8220;Poppi&#8221; to his family, earned his wings in the early morning hours of July 23, 2021. He passed away peacefully in his sleep with his daughter at his bedside, holding his hand. He was 84 years old. He was... View Obituary & Service Information

The family of Herbert Sidney Richmond created this Life Tributes page to make it easy to share your memories.

Herbert Sidney Richmond, “Poppi” to his family, earned his wings...