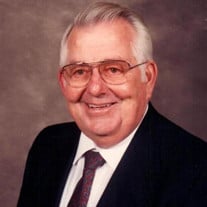 Herbert Carl Buck , loving husband, father, grandfather, and friend, passed from this earth to be with his heavenly Father on April 21, 2016. He was born in Santa Maria, TX on August 1, 1928 to Henry and Louise (Klostermann) Buck. He lived in several Valley cities and eventually settled in McAllen, TX. After high school, Herbert was employed by Southwestern Bell Telephone Co. After 2 years, he took a leave of absence and proudly served in the U.S. Army, 224th Infantry Regt., 40th Division from 1950 to 1952 during the Korean War. He then returned back to work for Southwestern Bell/ AT&T/ Alcatel-Lucent as an installer/repairman for a total of 35 years. On April 10, 1954, Herbert wed Joyce Marilyn Dutschmann. They were together for 45 years until the death of Joyce on December 25, 1999. Upon retirement, Herb continued his skill set by starting his own business, Buck's Communication. He was well-known throughout the Valley and truly enjoyed his work mostly installing and repairing business phone systems. However, he never hesitated to help out friends with their individual home phone issues. After 20+ years of owning his own business, Herb decided he would hang up his installer/repair belt. Throughout his years, Herb enjoyed many activities like coaching Little League baseball, fishing, camping, golfing, playing cards, traveling, and spending time with his family and friends. At one point, he was even a volunteer firefighter for the city of Pharr, TX. Herbert was a long time member of St. Paul Lutheran Church and served as an elder as well as a member of the church choir. He was very supportive of St. Paul Lutheran School as well as the youth of the church. Herb is survived by his daughter, Susan Minix of Baytown, TX; his son, David Buck and wife Ellen of San Antonio, TX; five grandchildren, Christopher Minix of Baytown, TX, Michael Minix of Houston, TX, Jordan Buck of San Marcos, TX, Taylor Buck of San Antonio, TX, and Madison Buck of Austin, TX; two of his brothers, Robert Buck and wife Virginia of Albany, Oregon and Kurt Buck of Lancaster, California; and also survived by numerous cousins and nieces and nephews. Herbert was preceded in death by his loving wife, Joyce Dutschmann Buck; father, Henry Buck; mother, Louise Buck; step-mother, Lydia Buck; brother, Melvin Buck; and his sister, Marie Buck. The family will receive friends from 4 to 6 pm on Sunday, April 24,2016 at Kreidler Funeral Home. To celebrate his life and victory over death, a funeral service will be held at 11:00 am on Monday, April 25, 2016 at St. Paul Lutheran Church, 300 W. Pecan Blvd. in McAllen, TX. Burial will follow the funeral service at Valley Memorial Gardens, 3611 N Taylor Rd, Mission, TX. Memorial contributions may be made to St. Paul Lutheran School for the Herb and Joyce Buck Memorial Fund, 300 W Pecan Blvd, McAllen, TX, 78501. Herbert is now home with his Lord Jesus Christ whom he trusted, loved, and followed all of his life.

Herbert Carl Buck , loving husband, father, grandfather, and friend, passed from this earth to be with his heavenly Father on April 21, 2016. He was born in Santa Maria, TX on August 1, 1928 to Henry and Louise (Klostermann) Buck. He lived... View Obituary & Service Information

The family of Herbert Carl Buck created this Life Tributes page to make it easy to share your memories.