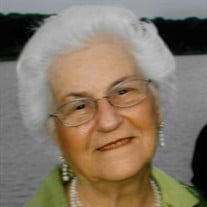 Hazel Vivian (Lloyd) Robinson, 98, wife of the late John Henry Robinson of McAllen, passed away Wednesday, April 14, 2021, at McAllen Memorial Hospital. Born November 4, 1922, in Clinton, North Carolina, she was the daughter of the late George and Martha (Howard) Lloyd of Bowden, North Carolina. After graduation from Warsaw High School, in Duplin County, North Carolina Hazel attended Business School in Charlotte; and later, she worked as an operator at the Southwestern Bell telephone company also located in Charlotte. She married her husband, a Texas A&M graduate and bomber pilot in the Army Air Corps during World War II. Afterwards they moved to McAllen where he became a farmer and she a housewife. Hazel was known for her cooking, baking and candy making skills. In addition, she became highly skilled at crochet. If you knew her well, you probably own something she painstakingly created. Hazel was an active member and officer in the Does, (the daughter organization of the Elks), and an active participant in the annual Texas Citrus Fiesta for many years. Throughout the years she enjoyed being a regular player of Bridge and Mahjong within a very special group of her closest and dearest friends. Hazel was quite charming and witty as well as tenacious. When given the opportunity she truly loved sharing humorous stories from her past. Hazel is survived by daughters Stella Ann (Robinson) Caruthers of Jenks, Oklahoma, and Brenda Arlene (McMillan) Rieke and her husband Neal of San Antonio, Texas; 4 grandchildren, Daniel Caruthers and wife Jessy of Lexington, Virginia, and Sarah (Caruthers) Maloney and husband Rob of Minneapolis, Minnesota, Tanya (Rieke) Hartley and husband Floyd of Morrison, Colorado, and Kami (Rieke) Rehfeld and husband Steven of San Antonio, Texas; and 7 great-grandchildren, Nova Caruthers, Vada Caruthers, Miles Maloney, Maggie Maloney, Maren Maloney, Benjamin Hartley, and Abigail Hartley. She is also survived by her brother Bill Lloyd and wife Ann of Warsaw, North Carolina. In addition to her husband Johnny’s passing, Hazel was also predeceased by two brothers, Elwood, and George Jr., and four sisters, Stella, Thelma, Georgia, and Lillian. Grave side service will be on Tuesday, with family members only, under the direction of Kreidler Funeral Home in McAllen. In lieu of flowers, one may wish to donate in her name to the Comfort House, 617 W. Dallas Ave., McAllen, TX 78501 or the Alzheimer’s Association. The family would like to extend a special thank you to her loving caregivers: Nina, Susanna, Mari, and the Allstate Hospice staff and special nurses Brenda and Isela.

The family of Hazel Vivian Robinson created this Life Tributes page to make it easy to share your memories.