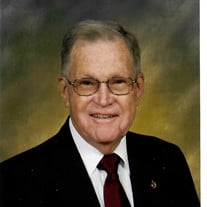 Harry Maynard Kreidler, 96, died Wednesday, Dec. 29, 2021, at Amara Hospice. He was born in McAllen in a house which was located on a lot which is now the north side parking lot for the Kreidler family funeral home. He lived in McAllen for most of his life with time out for college, WWII and three years in Eagle Lake, TX. His ready smile and clean sense of humor were reserved for friends and acquaintances with whom he could relax as a contemporary that shared the same values and priorities. His inclination for pranks was sometimes on display when he was on family vacations and while visiting relatives, by marriage, in Louisiana and Mississippi. Maynard was a fan of history and preferred reading about WWII and the American Civil War, a huge fan of opera and a regular tenor soloist in the First Presbyterian Church choir He enjoyed tennis until it threatened to interfere with golf which was a central priority of his life and in which his strongest friendships were nurtured. Decisive, punctual and acutely aware of his public visibility he was an adamant achiever in all things service oriented. He was a member and Past Master of McAllen Lodge #1110, A.F. & A.M., Past District Deputy Grand Master District 40B, Grand Lodge of Texas, Scottish Rite San Antonio Consistory, Alzafar Shrine, Past President of the McAllen Chamber of Commerce, American Legion Loyal Service Post #37, First Presbyterian Church of McAllen, McAllen Rotary Club, and as a young man he was a member of McAllen Volunteer Fire Dept. For many years he was a volunteer at Rio Grande Regional Hospital and a volunteer driver transporting children from the Valley and Mexico to the Shriner Hospital for Crippled Children in Houston. Maynard, a USAAF Veteran, trained as a waist gunner in B-29’s although he had hoped his experience working for Pan Am as a Host on the DC-3 route between Brownsville and Medellin, Columbia or Trinidad and Tobago would secure him a spot on an officer’s C-47. V-J day occurred two weeks prior to the end of his gunner training. He was a proud member of the fighting Aggie Band his freshman college year but then joined the USAAF and after the war he attended and graduated from Texas A&I in Kingsville. Maynard, known to his children as Daddy then Dad then Dadsinville then His Majesty the King, and known to his grandchildren as Granddaddy, Odaddy or Grandpa Maynard, is survived by his wife Fern; sons John (Kay) and Colly (Kathy); daughter Sue Ellen (Mike) Jones; grandchildren, William, Gretchen (Greg) Austin, Peter (Rachel) Kreidler, Casey and Jason (Marlene) Wiginton, Michael (Catie) and Rachel (Patrick); and 7 great grandchildren. He was preceded in death by his first wife, Sue and his daughter Mary Maude Wiginton. A visitation will be held at Kreidler Funeral Home from 5:00 PM to 8:00 PM on Wednesday, January 5, 2022. Funeral services will be held on January 6, 2022 at 10:00 AM at First Presbyterian Church in McAllen with burial to follow at Roselawn Cemetery. Masks are required in the church. Memorial donations may be made to Vannie E. Cook, Jr Children's Cancer Clinic, 101 West Expressway 83, McAllen, TX 78503

Harry Maynard Kreidler, 96, died Wednesday, Dec. 29, 2021, at Amara Hospice. He was born in McAllen in a house which was located on a lot which is now the north side parking lot for the Kreidler family funeral home. He lived in McAllen for most... View Obituary & Service Information

The family of Harry Maynard Kreidler created this Life Tributes page to make it easy to share your memories.