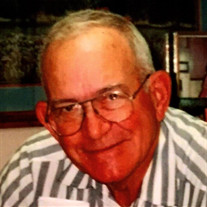 Harold Judson “Jud” Brady, 91 of McAllen, TX passed away on October 28, 2016 while enjoying a daily walk. Born on April 23, 1925 in Arkansas City, Kansas, he was the eldest son of Judson Ray and Eleanor “Nell” Brady. After graduating from Arkansas City, Kansas High School, Jud attended Oklahoma University, Norman Oklahoma with a BS with honors in Petroleum Engineering. He proudly served in the United States Navy at the end of World War II completing flight training on a U.S. Naval carrier and thus, began his love of flying. He began his career in Big Spring, TX as district petroleum engineer for Seaboard Petroleum. In 1953 he accepted a job with B W Paulie to work with Pemex, Mexico and moved his family to McAllen. Later he became a partner in Birdwell and Brady Drilling Company. In 1970 he changed careers and opened Brady’s Duty Free Stores. He possessed a strong work ethic and was a tireless worker always enjoying a good challenge. Jud loved the outdoors, hunting, flying his private planes and most of all, being with his numerous and faithful dogs. He is survived by his loving wife, Gloria, daughters; Paula (Paul) Moxley of McAllen, Judy Brady of Houston, Ania (Ruben) Temkin and Cyndi Brady all of McAllen and son, Robert Judson Brady of San Antonio, TX. He is also survived by his grandchildren, James Haynes (Meghann), Judson Haynes, and Brady Haynes, Erin, Caitlin, Blair and Matthew Brady, Katia and Johan Temkin, and Marcelo Valdez; great-grandchildren, Piper and Adelaide Haynes; his mother-in-law, Elvira Bahena and numerous cousins. Support and loving thanks are given to his neighbors, close friends and his many loyal employees who were also his extended family. He was preceded in death by his parents, and one brother, Robert Harrison Brady (Twan) and his first wife, Faye Evelyn Chatterton. In keeping with his wishes, Jud will have a memorial gathering for family and friends to be held on Sunday at 10:45am at Kreidler Funeral Home, 314 N. 10th Street, McAllen, TX with burial on Sunday at 3:00pm at Valley Memorial Gardens in Mission, TX. Pallbearers are Robert Brady, Paul Moxley, Jeff Grossman, Francisco Guerra, Eluterio Rocha and Vernon Rosser. In lieu of flowers, the family requests that persons wishing to honor his memory may be made to a charity of your choice.

The family of Harold Judson " Jud " Brady created this Life Tributes page to make it easy to share your memories.