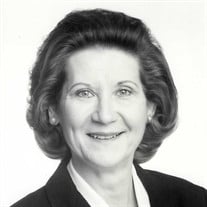 Gladys &#8220;Chip&#8221; Manning passed away at the Legends Transitional Care Center in McAllen, TX after a lengthy battle with Alzheimer&#8217;s. She enjoyed her 92 years of life, which was full of happiness, travel and a deep love for family... View Obituary & Service Information

The family of Gladys "Chip" Manning created this Life Tributes page to make it easy to share your memories.

Gladys “Chip” Manning passed away at the Legends Transitional...