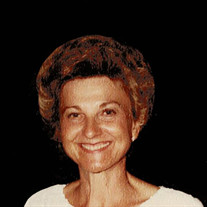 GERTRUDE ANN FORTHUBER, 85, passed away peacefully at her home surrounded by family on Wednesday, December 1st. She was born in the spring of 1936 in San Juan, Texas. She is preceded in death by parents, Fred and Ilse Krenmueller, sister, Margaret Krenmueller, husband, Bert Forthuber, and son, Fred Forthuber. Born and raised on the family farm, Trudy lived in the same home her whole life. The child of Austrian immigrants, she learned to speak German, then Spanish and finally, English upon entering kindergarten. As a child, Trudy’s sweet disposition and loving nature were apparent as she patiently and lovingly cared for her sister Margaret who had cerebral palsy. In the early days of the farm, Trudy spent countless hours with the many families who lived and worked on the farm. These families were part of her extended family forming a small close-knit community. At a young age, Trudy was swept off her feet by an Austrian musician named Bert Forthuber. In 1954, Trudy and Bert were happily married and remained so for 60 years. Bert stepped in to help Trudy run the family farm. Together, they had three children, Fred, Lisa and Marcus. Trudy found her greatest joy as a wife and mother who showered her children and grandchildren with unconditional love and affection. Trudy made family gatherings and holidays magical as she carried on family traditions by cooking Austrian recipes, baking Christmas cookies and decorating the annual gingerbread house. Off the farm, Trudy was passionate about her PEO sisters, the children of Su Casa de Esperanza and her home in Pagosa Springs, CO. She is survived by her daughter, Lisa Cofoid (Steve), son, Marcus Forthuber (Courtney), and grandchildren, Trevor Cofoid (Angelica), Philip Cofoid (Lisa), Hunter Cofoid, Garrett Forthuber and Sarah Forthuber and great-grandchild Ellie Cofoid. The family would like to express their gratitude to her loving caretakers the past few years. Contributions in Trudy’s memory can be made to the following: Su Casa de Esperanza, 8000 Cisne St., Pharr, TX 78577, Vannie E. Cook, Jr. Cancer Foundation, 101 W. Exp. 83, McAllen, TX 78503 (vanniecook.org). Visitation with the family will be at Kreidler Funeral Home on Thursday from 5:00-7:00 pm. A private burial service will be held by her family. . kreidlerfuneralhome.com

GERTRUDE ANN FORTHUBER, 85, passed away peacefully at her home surrounded by family on Wednesday, December 1st. She was born in the spring of 1936 in San Juan, Texas. She is preceded in death by parents, Fred and Ilse Krenmueller, sister, Margaret... View Obituary & Service Information

The family of Gertrude Ann Forthuber created this Life Tributes page to make it easy to share your memories.

GERTRUDE ANN FORTHUBER, 85, passed away peacefully at her home...