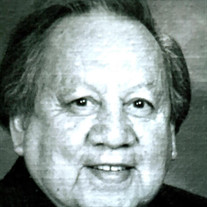 George Flores, Jr., age 82, passed away peacefully at home surrounded by his loving family on August 15, 2019. George was born in McAllen, Texas and remained a lifelong resident. He attended McHi and graduated with the class of '56. In 1960, George joined the Texas National Guard and was called to active duty as a member of the US Army, Armored Division during the 1961 Cuban Missile Crisis. He was honorably discharged from the Army in 1962 but remained with the Guard until 1963. After his military service, George continued serving his community as a firefighter for the McAllen Fire Department, rising to the rank of captain. During the 1980's George was a local manager for Brown Express and also worked for Southwest Motor Transport. In 1997, George joined what would be his final employer, the US Postal Service, retiring in 2007. George married Emma Longoria in 1958 and they were blessed with a daughter, Melissa, their only child. He often said that the greatest joys in his life were the births of his daughter and his two grandsons. George enjoyed making people laugh and was always quick with a joke or story. He was an avid sports fan, a hunter, a fisherman and he played pitcher for City League baseball teams. He also loved to cook, and his menudo was legendary among family and friends. George is preceded in death by his parents, Jorge and Rafaela Flores, sisters, Gloria Ortiz, Angelina Perez, and brother, Honore Flores. He is survived by his wife of 61 years, Emma Longoria Flores; daughter, Melissa Garza (Silvestre [Silver] Garza, Jr.); grandsons, Silvestre (Trey) Garza, Ill and George Alec Garza; sisters, Angelica Longoria (Santee, CA), Lydia Armstrong (Houston, TX), Rosie Serna (Portage, WI), Julie Alaniz (McAllen, TX) and numerous nieces and nephews. Visitation will be held at Kreidler Funeral Home on Monday, August 19th beginning at 5:00 p.m. followed by a rosary at 7:00 p.m. Mass will be held Tuesday, August 20th at 10:00 a.m. at Our Lady of Perpetual Help Church where George was a longtime member and usher. Burial will follow at La Piedad Cemetery. The family wishes to extend their gratitude to the staff of Corazon Hospice Care but especially to, Hortencia, Lilly, Dinora, Alma and Jose for their devotion and attentiveness.

George Flores, Jr., age 82, passed away peacefully at home surrounded by his loving family on August 15, 2019. George was born in McAllen, Texas and remained a lifelong resident. He attended McHi and graduated with the class of '56. In 1960,... View Obituary & Service Information

The family of George Flores Jr. created this Life Tributes page to make it easy to share your memories.