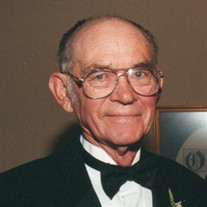 FRED J. ROCK was at home when he went to be with his beloved Savior, Sept. 23, 2015. Now he is with his cherished wife of 62 years, Gilda Ruth Rock, praising the Lord together. Fred was born in Michigan in June of 1929. He became a man that was true to his name, solid. A profound man of faith, his life embodied the old hymn, “On the solid rock I stand, all other ground is sinking sand.” Fred was a pastor in his 20s and attended bible school with a rock and roll star named, Jerry Lee Lewis. He was a man of tradition; each night he would get a big bowl of ice cream, and read his bible. He built an unshakeable foundation of faith for his children: Sheryl (Robert) Hamer, Brian (Claudia) Rock and Barry (Laurie) Rock. The later years of his life were spent building Rock Construction. His grandchildren remember his houses were solidly built, “he would use ten times more nails than any other contractor.” Fred enjoyed hunting and fishing, but his real love was collecting. Saturday mornings he would head out to garage sales. His home was like a museum, full of items with interesting histories. Fred was a man of godly character; setting an example of work ethic, honesty, quality, integrity and generosity. He loved Christmas and wanted all kids to have gifts to open; so even after working extra jobs he would stay up and wrap gifts. He took pleasure in having people come to his home for dinner, and over the past few years his pastor joined him almost every Tuesday night. He was old school and found it hard to ask for help; but was the first to offer help to others. He had a kind and caring heart creating a testament to laying down your life for those you love. From out of two people, Fred and Gilda, blossomed 3 children, 10 grandchildren and 11 great-grandchildren; lives that would never have been if not for the steadfast commitment of this man and the woman he loved. Grandchildren: Jennifer Johnson Lawrence, Rodney (Kristin) Johnson, Chad (Stefani) Hamer, Josh (Esther) Hamer, Jonathan Rock, Christopher Rock, Melissa Alba, Kasie Terry, Lindsey Terry, Jessica (Joseph) Watt. Great-grandchildren: Brey Browne, Addyson Lawrence, Wade Lawrence, Ashley Lawrence, Skye Johnson, Hunter Johnson, Justice Johnson, Dylan Johnson, Jackson Erb, Sloane Hamer, Olivia Watt. Viewing will be held on Friday September 25, 2015 6:00 pm – 8:00 pm at Kreidler Funeral Home. The memorial service will be Saturday, September 26, 2015 at 10:00 am at Full Gospel Tabernacle in Pharr with burial to follow at Roselawn Cemetery. Kreidler Funeral Home is in charge of all arrangements. www.kreidlerfuneralhome.com Donations can be made to Full Gospel Tabernacle, 707 West Sam Houston Blvd. Pharr, Texas 78577.

FRED J. ROCK was at home when he went to be with his beloved Savior, Sept. 23, 2015. Now he is with his cherished wife of 62 years, Gilda Ruth Rock, praising the Lord together. Fred was born in Michigan in June of 1929. He became a man that... View Obituary & Service Information

The family of Fred Rock created this Life Tributes page to make it easy to share your memories.

FRED J. ROCK was at home when he went to be with his beloved...