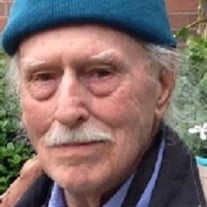 Fred Edward Ellis, Jr., resident of Edinburg, TX, died Monday, January 30, 2017 at the age of 90. Born April 22, 1926, he was the only child of Fred and Ruby Ellis. Fred Sr. ran the Western Union office in Dodge City, Kansas and taught Fred Jr. telegraphy and Morse Code, how to hunt, and to be a Ham Radio operator. Fred Jr. enlisted in the Navy and during his two tours was stationed in Japan and Korea and crossed the International Date line. Capitalizing on his Navy training, Fred moved to Greenville, TX and worked as a radio station engineer while attending college on the the GI Bill. He graduated with a BA in Art from East Texas State College in Commerce, TX and stayed to earn two Masters Degrees, in Math and Physics. He met his first wife, Shanta Venkatesa, of Bangalore, India, at a college event. They moved to Baton Rouge, Louisiana where Fred became parent to a daughter, and he earned a PhD in Radio Astronomy from Louisiana State University. The family moved to Edinburg, TX, and Fred started his life-long career as a Professor of physics, physical science, math, astronomy and more, and welcomed a second daughter. He endured the loss of his first wife more than two decades later. He served as a Professor at the Edinburg institution while it had different names — Pan American College, Pan Am University, and UT-Pan Am. Fred met his soul mate, Victoria Shannon, before retiring from UT-Pan Am, and they spent twenty joyful years in each other’s company before her passing. Throughout Fred's life he appreciated novelties and was an early adopter of new technology. While working on his master’s degrees he bought a plane and learned to fly. With a keen appreciation for art and engineering, he purchased a new 1956 V-8 convertible Ford Thunderbird car, then a 1966 Mustang with his wife, and a convertible Mustang in his retirement years. He enjoyed science fiction and was a fan of 'Star Trek' and 'Star Wars'. He owned early versions of personal and 'portable' computers and taught his daughters to use them, and he used smart phones with texting. He guided a start-up semiconductor business led by a former student, supported local youth science events and had articles published. After years of enjoying sailing his trimaran boat based in Port Isabel, TX, he took up windsurfing. Fred brought his own targets to a local gun range to practice skills honed during boyhood. In his 70’s Fred built an 11-meter tall antenna to boost his Ham Radio operations. Fred is survived by his two daughters, Bharati Tara and Leonid (Lee), stepdaughters, Vicki Siebrecht and Johnnie Odoms, and son-in-law, Russ Noseworthy, and Lee’s son, Devin Noseworthy. He was preceded in death by his first wife, Shanta Venkatesa, second wife, Anna Victoria, and his parents, Fred and Ruby Ellis. A memorial celebration will occur Friday, February 3, 2017 from 6 to 8 p.m. at UC Chapel of the Lord's Prayer UTRGV Campus; 1201 W. University Drive, Building 16; Edinburg, Texas 78539. The family thanks Fred's university, community and veteran’s colleagues, health care professionals, Charles Strong, MaryAnn Rios and his devoted former student, steadfast friend and advocate, George Villagomez. In lieu of flowers, any donations in Fred's name may go to the conservation organization Sea Shepherd; P.O. Box 8628; Alexandria, VA 22306; Tel. 212-220-2302, Fax 818-279-0707. SeaShepherd.org "AC5SO (formerly W5PTZ) Calling All Stations. Signing Off. 73"

The family of Fred Edward Ellis Jr. created this Life Tributes page to make it easy to share your memories.