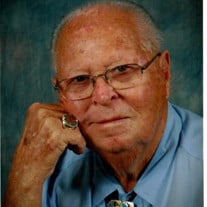 Frank O. King passed away November 20, 2015, in Mission, Texas to be with his Lord and Savior Jesus Christ. He was born on November 11, 1928, in Bartlesville, Oklahoma, to Ernest and Audiene King. He married Ramona Pauline King on June 15, 1946, in Bartlesville, Oklahoma. They enjoyed 65 years of blessed marriage. He retired from Phillips Petroleum Company in October 1985, and, after that they traveled throughout the United States and several foreign countries. His beloved wife preceded him in death on September 5, 2011. Of particular pride to Frank was his Native American heritage. He was a proud member of the Osage Nation, belonging to the Pawhuska District Eagle Clan, located in Pawhuska, Oklahoma. On April 3, 2004, he was honored to receive his Osage name in a special ceremony conducted by tribal member Harry Red Eagle, Jr. The Osage name given him was "Tah Wa He", translated to mean "Arrives at Village". Frank also participated for several years in the South Texas Indian Dancing Association, where he danced in several of the local Pow Wows. He also danced in all 3 Osage l'n-Lon-Schka ceremonial dances. Frank was most proud of his family and faith. He was a man of strong faith, which he was eager to share with anyone who would listen. He was an active member of the First Assembly of God church in McAllen, TX. He spoke often of his wife of 65 years (Pauline), and, the "big beautiful family" she left him. He is survived by his three sons, Ron (Jan) King of Bixby, Okla., Don (Deloris) King, Mission, TX, and Rev. Jim (Pam) King of Tulsa, Okla.; six grandchildren; twelve great grandchildren; one sister and brother-in-Law, Mr. & Mrs. Max Patton of Bartlesville, Okla. Frank enjoyed being called "Grandpa" by not only family, but many friends. He was preceded in death by his wife, Pauline, and two grandchildren, Scott King and Ronna King. The family would like to express special appreciation and heartfelt thanks to Waterford Gardens Assisted Living, Mission, Texas. Ms. Lucile Cavazos, and, staff, gave Frank much pleasure and comfort during his last few years of life. The family is extremely grateful for the care given Frank. Funeral services will be conducted at 11:00 AM on November, 25, 2015, at the First Assembly of God church, 2401 N. McColl Rd., McAllen, Texas. Family visitation and viewing will be before the funeral service, from 9:00 AM to 11:00 AM, at the church. Grave side services and interment will be December 3, 2015, at 11:00 AM at Memorial Park Cemetery, in Bartlesville, Oklahoma. A memorial fund has been established in his name and honor with House of Joy Orphanage of Kahovka, Ukraine. Contributions to the fund should be made out to Awaking Hope, P 0 Box 700209, Tulsa, Oklahoma, 74170.

Frank O. King passed away November 20, 2015, in Mission, Texas to be with his Lord and Savior Jesus Christ. He was born on November 11, 1928, in Bartlesville, Oklahoma, to Ernest and Audiene King. He married Ramona Pauline King on June 15,... View Obituary & Service Information

The family of Frank O. King created this Life Tributes page to make it easy to share your memories.