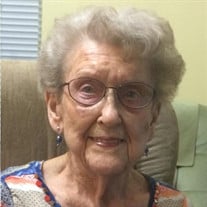 Evelyn Elaine (Olson) Lawrence, 97, of McAllen, TX passed away on April 14, 2016 at the McAllen Medical Center. Evelyn was born on a family farm near Waverly Township, Martin County, Minnesota on December 29, 1918 to Florence Edna (Toedt) Olson and Martin Olson. She grew up on the farm, attended the District 82 School in Martin County and graduated as salutatorian from St. James High School in 1937. She graduated from The Minnesota School of Business in 1939, where she studied accounting. Evelyn started her career at Booty's in Worthington MN and quickly moved on to serve as treasurer of the St James Creamery, an affiliate of Land O'Lakes, in St. James MN. Evelyn was united in marriage to John Robert Lawrence on March 22, 1947 at Waverly Lutheran Church in Martin County. Evelyn and John built a home in St. James, living briefly in Alabama while John was in the service, until John's job with the American Automobile Association took them to Montevideo and then on to Edina, MN in 1956, where they raised their daughter, Wendy. They were avid golfers and bridge players; read the newspaper everyday; and enjoyed watching sports, particularly golf. Upon retirement, Evelyn and John moved to Sun Lakes, AZ., returning to the family farm in Minnesota for the summers. In 2007, after 25 years in Sun Lakes, Evelyn moved to McAllen, TX to spend more time with her grandchildren. Fiercely independent throughout her life, Evelyn was an advocate for education, and an active member of her church and community. Her confirmation memory verse was "Serve the Lord with gladness; come before his presence with singing" [Psalm 100,2]. She lived her verse. She was quick to do for others. She drove others for Neighbors Helping Neighbors until she was always older than anyone she was driving. Her friends saw her strength, her love, her protection, and felt her touch on their lives. Evelyn is survived by her daughter, Wendy Ann LawrenceFowler (Richard Fowler), two grandchildren, Adrienne Ann Lawrence Fowler and Travis Martin Lawrence Fowler, dear friends and family. Evelyn was preceded in death by her parents, husband John Lawrence, sister Norma Ruth Nordhausen Brandt, and a multitude of relatives and friends. Friends and family will gather later this year at Waverly Lutheran Church in Martin County, Minnesota for a memorial service and interment in the Waverly Church Cemetery.

The family of Evelyn Elaine Lawrence created this Life Tributes page to make it easy to share your memories.