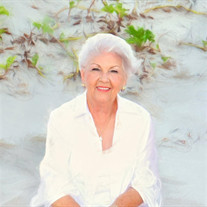 Eva Esther Ernestine Powell Scoggins February 1, 1937 – February 4, 2018 Ernestine (“Tina”) Scoggins returned home to the loving arms of our Savior Jesus Christ on Sunday February 4th, 2018 in Houston, Texas after a short illness and stay at Houston Methodist Hospital. Tina was born to Ernest and Iva Powell on February 1st, 1937 in Harlingen, Texas. As the youngest of three siblings, she adored her brother Robert, and sister Helen, for all of their lives and committed herself to their tender care until they each had passed from this life. Tina met Jack Scoggins while attending Harlingen High School. Their complimentary spirits entwined immediately, and “Jack and Tina” were wed on Easter Sunday, April 18, 1954 (before Sunday service at First United Methodist Church of Harlingen). She was a loving and devoted wife to Jack, supporting him in building Starr Feedyards, Inc. in Rincon, Texas. Though Jack was the “boss” at the feedyard, friends lovingly erected a sign at the front gate of Starr Feedyards that read: Tina Scoggins, Mayor. Eleven months after she and Jack wed, Tina began her life’s calling when her son Jack Henry Scoggins, Jr. (“Jackie”) was born. One year and six days later, a daughter, Jana Beth Scoggins Eidson followed. Tina adored her children. And they, her. As they grew, her child-like spirit imbued within her children as she joined them in daily play and showed them her rare and enduring characteristic of living joyfully. A supportive mother, Tina raised Jackie and Jana Beth and developed a deep friendship with her children while creating a home adorned by love with Jack. Jackie and Jana Beth went off to their respective colleges after graduating from Harlingen High, and soon, started families of their own. In 1978, Tina began her second calling, grandmother, and received a new name: Mimi. And this, as they say, is when she went pro. Her grandchildren would be hard-pressed to encapsulate the love Mimi had for them with mere words . . . a love and friendship that “walked with each of them daily.” From digging worms, to building sand castles, to long talks on the phone . . . Mimi was a connected encourager in each stage of their lives. Some would describe it as fierce, still others, enduring. Whatever the descriptor, all would agree, it was unyielding for Somer, Jacqueline, Taylor, Dillon, Grant, and Savannah. She poured herself into each of these lives. Whenever a tear formed, or a frown ensued, Mimi was there to manifest the opposite no matter the distance required to travel, or length of the Toys-R-Us receipt. Although her favorite saying regarding her grandchildren was, “You can’t be spoiled if it’s done with love,” she instilled in them humility, work ethic, and was quick to teach about their true worth. Attending countless birthday parties, recitals, programs, games, graduations, weddings, births of her great-grandchildren, job promotion celebrations, return from service in the Iraq War, Mimi was there to celebrate her family in every conceivable instance. There to tell you she loved you. That she was proud of you. She spent her life loving her family in every moment, in every way, and in every circumstance. Her’s was a life well-lived, punctuated with many weekends and holidays spent together at Los Novillos Ranch and summers spent at Sun Tide III. She has left an undeniable impression on each of us and we will miss her so very much. Mimi is survived by her husband of 63 years, Jack (“Papu”), two children: Jackie Scoggins and his wife Melodye, of McAllen and Jana Beth and her husband Jim of Dallas, six grandchildren: Somer Neuhaus (Kevin), Jacqueline Scoggins, Taylor Wood (Ryan), Dillon Scoggins, Grant Eidson, and Savannah Near (Andrew), seven great-grandchildren: Quinten, Joaquin, and Jake East, Skipper and Ann Vacek, and Weston and Peyton Neuhaus, employees, past and present, of Starr Feedyards, Inc., countless life-long friends of Harlingen and McAllen that she loved like family. The family would like to extend a special thanks to Mimi’s lifelong friend, Wanda Carruth, for her devoted friendship . . . a true sister to Mimi. She loved living in the Rio Grande Valley all of her life and was active in her community for many years. She was a faithful servant of the First United Methodist Church of McAllen, coordinating many fundraising events, including Temptations, as well as serving on the board of the church. She was also a member of PEO, and Beta Sigma Phi, where she served as President. Though her fingernails were often never without polish, Mimi was never afraid to get her hands dirty. She was passionate about gardening, decorating, and flower arranging for those too ill to attend Sunday services. She had a unique gift that allowed her to make those around her feel loved and cared for. Though you often never had to wonder what Mimi was thinking, it was assured that she always did everything out of love. She lived a life that gave and enriched others, if someone was without a smile, she was quick to give them her’s. Upon entering Heaven’s gates and being greeted by her Lord and Savior, it is without a doubt she was greeted with, “Well done, my good and faithful servant.” She was an earthly example of the unconditional love of the Father and we feel blessed to have called her ours. The family will receive friends and family at Kreidler Funeral Home on Thursday, February 8th from 6-8 pm. Following a private family burial, a memorial service will be held in her honor on Saturday, February 10th at 11 am First United Methodist Church of McAllen, with a fellowship immediately following the service. In her memory, donations can be made to First United Methodist Church Building Fund, McAllen, Texas.

The family of Eva Esther Ernestine Powell "Tina" Scoggins created this Life Tributes page to make it easy to share your memories.