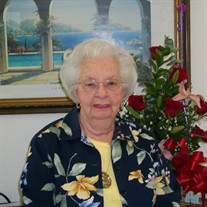 Eula “Loretta” Risica went into the loving arms of Jesus at the age of 92 on May 16, 2022 in McAllen, Texas. Loretta was born in Oklahoma to Retie Ceula & Harvey D. Cash. In the late 1930s, the Harvey Cash family moved to Lyford, Texas, where Loretta and her 8 siblings grew up listening to their daddy preach on Sundays at Sardis Primitive Baptist Church, learning how to farm with the family, and snacking on cantaloupe & gravy. The importance of hard work, family togetherness and attending church on Sunday mornings were ingrained in Loretta at an early age. Those are values that she instilled in her own children and carried on throughout the rest of her life. Loretta moved to San Antonio, Texas to attend business school at the age of 16, where she met the love of her life, Sam Risica. A love story for the ages, Loretta and Sam built a life together worthy of admiration. After marrying in San Antonio and having their first son, Ron, family ties pulled them back to the Rio Grande Valley. They went on to have 3 more sons, Pat, Tony and Mike, and started a glass business the year after Mike was born. Sam, an ambitious entrepreneur and social butterfly, was successful in his business ventures in large part due to his better half, Loretta. With a gentle ability to act as the voice of reason, along with her sharp business skills, Loretta quietly supported the family business as it grew from the Edinburg Glass Company to Risica & Sons, Inc. when all their four boys grew older and showed an interest in joining the company. Once Sam passed in 1984, Loretta continued on as the matriarch of both the family and the glass business. She referred to herself many times as both the accountant and the referee when things between the boys got too intense - once again using her gentle gift of reason. Though Sam passed at an early age, Loretta never had the desire to remarry. A fiercely devoted wife, Loretta stated that she had already experienced “the love of a lifetime” with Sam, and she claimed that she found strength and love from her family after he was gone. While working with her four boys each day was her truest joy and blessing, Loretta also enjoyed attending social groups, such as Book Club, PEO and the Valley Symphony Orchestra. She served as a member on various boards, including the Band Booster Club, Aggie Moms Club, 4-H Club and The Museum of South Texas History. Loretta was also awarded Edinburg Woman of the Year. There is no family more thankful for the mother, grandmother, mother in law, aunt, cousin and friend that Loretta was. She considered her family “the joy of her life” and always made sure that each person she came in contact with left her presence feeling more important and special. Loretta is preceded in death by her husband Sam Risica, her parents Retie & Harvey Cash, and her brothers Milton, John Troy, Don, Lyndon & Aaron. She is survived by her 4 loving sons, Ron (Neva), Pat (Kim), Tony (Tammie) and Mike, and her 3 sisters, Leatha Jeffrey, Laree Morrow and Lela Adams. Loretta leaves behind a legacy through her 12 grandchildren: Ashley, Amy, Heather, Chelsey, Kasey, Brooke, Shelby, Jordan, Taylor, Reilly, Cedar and Trevor. Watching her family grow was Loretta’s greatest treasure. She was overjoyed to meet each of her 18 great grandchildren. Sadly, she didn’t have the privilege of meeting her 19th great grandchild and first namesake, Leighton Loretta, due to arrive in August 2022. While it saddens us all that she’ll no longer be around to continue watching her family grow, we are comforted by the thought that her legacy lives on through the next generation. Pallbearers will be Jordan Risica, Trevor Risica, Reilly Brinkley, Todd Cash, Sam Morrow, Joey Morrow and Matt Adams. Visitation will be held at Kreidler Funeral Home on Friday, May 20 from 6-8PM. A funeral service will be held on Saturday, May 21 at 10AM at Calvary Baptist Church in McAllen, followed by a burial at Hillcrest Memorial Cemetery in Edinburg. A reception to celebrate Loretta’s life will be held at the Echo Hotel immediately following the burial. In lieu of flowers, donations may be made to the Museum of South Texas History.

The family of Mrs. Eula Loretta Risica created this Life Tributes page to make it easy to share your memories.

Eula “Loretta” Risica went into the loving arms of Jesus at the...