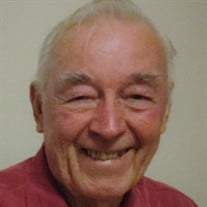 Eugene Polewski, 86, passed away at home after a short illness. God called him home to reunite with his beloved wife of 60 years, Patricia, who preceded him in death in 2014. He is survived by their four children, Jessie (widow of Zeke Reyna) James (Mary Ann), John (Sandi) and Daniel (Nuria); six grandchildren, Amanda, Lily, Nicholas, Katrina, Alexandra and Michael; three great grandchildren; brother Robert (Ann), and Patricia's sister Kathleen (David) O'Brien. He was preceded in death by his brothers Ben and Stanley and sisters, Felice, and Bernadine. Eugene enlisted and served in the USMC. He served during the Korean War and was part of the Inchon landing force. Eugene was a graduate of Marquette University and worked much of his professional life for the State of Wisconsin as a special investigator. Upon retirement, Gene and Patricia, settled in McAllen, where they actively enjoyed retirement, Home, and Family. He became a farmer and stayed busy with several citrus orchards. Eugene always enjoyed painting, and was treasurer of the Hidalgo County Watercolor Society. He described himself a student of the Happy Accident School of Art but was actually quite an accomplished artist and his children and grandchildren proudly display his beautiful artwork in their homes. His paintings will be cherished reminders of his love of life and the joy he brought to his family. His playful spirit and his demonstration of the pleasure to be found in hard work to accomplish a worthwhile goal were daily gifts to his children and grandchildren. Eugene constantly demonstrated the virtues of doing the right thing and helping others, and by his example he taught his children and grandchildren the priceless satisfaction of doing well by doing right. Eugene lived Christian values every day. He will be deeply missed and happily remembered by his family and friends. Visitation will be from 6-8 pm, Wednesday, Dec.7 at Kreidler Funeral Home with a rosary at 7pm. Funeral mass will be Thursday, Dec. 8 at 10 am at Our Lady of Sorrows Catholic Church, Interment will follow at 1:00pm at the RGV State Veterans Cemetery.

Eugene Polewski, 86, passed away at home after a short illness. God called him home to reunite with his beloved wife of 60 years, Patricia, who preceded him in death in 2014. He is survived by their four children, Jessie (widow of Zeke Reyna)... View Obituary & Service Information

The family of Eugene Polewski created this Life Tributes page to make it easy to share your memories.

Eugene Polewski, 86, passed away at home after a short illness....