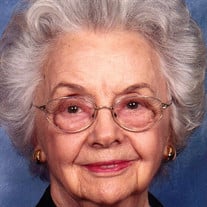 Esther Ramseyer Miller peacefully entered the presence of our loving God on October 30, 2018 at the age of 102. The daughter of Mary and Alvin Ramseyer, she grew up on their family farm in Ohio as one of nine children. Her earliest childhood memories were of sharing household chores with her siblings, learning family traditions, and worshipping God surrounded by the magnificent a cappella harmonies of the Mennonite Church. Those years formed the very foundations of her life - love for God, family, friends, and beautiful sacred music. Esther attended Bluffton College in Ohio, where she earned her Bachelor's Degree in School Music. On her first day of class at Bluffton, she met the love of her life, Jim Miller, who had the privilege of escorting her when she was chosen by the student body to be their May Queen at the conclusion of her senior year. Although brief, her busy career in public schools included teaching music in grades 1-12 and directing a high school girls' choir, a mixed choir, an orchestra, and a band. She also taught English to junior high and high school students. Esther and Jim were married in 1941 in a garden wedding on her family's farm. In 1946, they moved to Mission, Texas, which became her home for more than 70 years. They soon became members of the First United Methodist Church of Mission, where she shared her love of beautiful music as director of the choir for 30 years. In that capacity, she was instrumental in organizing vocalists from across the region to perform the Rio Grande Valley's first presentation of Handel's Messiah. She directed the Messiah from 1952 until 1980 at the church as well as at a guest performance in Reynosa, Mexico. Both Esther and Jim treasured their home in Mission and being active members of the community they loved. She was a member of the Mission Study Club and P.E.O. Chapter J and became a founding member and president of P.E.O. Chapter EY. She also served as Mission's "First Lady" during Jim's term as mayor. Her family will always treasure the wonderful memories of holidays and other family gatherings in her home - beautifully prepared meals, delicious homemade rolls and pastries, music, scripture readings, laughter, as well as games and traditions handed down for generations. In her home, there was always room at the table for an extra guest. Her kind, loving, gentle nature reflected her faith in God, which guided her throughout her life. She was preceded in death by her husband of more than 70 years, James F. Miller, Sr., her parents, and seven sisters and brothers. She is survived by her children, Linda (Jack) Nickel, Dr. James (Terry) Miller, John (Susie) Miller, Kathy (Jim) Bledsoe, and David (Julie) Miller. She is also survived by 15 grandchildren, whom she adored, along with 29 great-grandchildren, who were her crowning joy. Other survivors include her sister, her sister-in-law, and many nieces and nephews. The family expresses its sincerest gratitude and appreciation to her longtime caregivers, Maria Dolores (Lolita) Mendoza, Elma Espinoza, and Michelle Babcock and also to the wonderful staff at The Gardens at Brook Ridge Assisted Living and Memory Care Unit in Pharr, Texas. Visitation will be held on Friday, November 9, 2018 from 6:00 to 8:00 p.m. at the Kreidler Funeral Home in McAllen. A service celebrating her life will begin at 2:00 p.m. on Saturday, November 10 at the First United Methodist Church of Mission with her grandsons serving as pallbearers and the husbands of her granddaughters serving as honorary pallbearers. In lieu of flowers, the family suggests gifts to the Music Department of the First United Methodist Church of Mission, 1101 Doherty, Mission, TX 78572 or a random act of kindness in her memory.

Esther Ramseyer Miller peacefully entered the presence of our loving God on October 30, 2018 at the age of 102. The daughter of Mary and Alvin Ramseyer, she grew up on their family farm in Ohio as one of nine children. Her earliest childhood... View Obituary & Service Information

The family of Esther Ramseyer Miller created this Life Tributes page to make it easy to share your memories.

Esther Ramseyer Miller peacefully entered the presence of our...