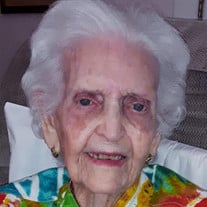 Shortly after celebrating the milestone of her 100th birthday, Elsie Page Bell peacefully entered her heavenly home on August 11, 2020. Elsie was born in Blooming Grove, Texas, to Gordon and Eula Page on June 27, 1920. She graduated Blooming Grove High School in 1937 in a class of 11 girls and 11 boys. In 1941, she graduated from Texas State College for Women with a degree in Elementary Education. Elsie moved to the Valley in the summer of 1942 to begin her teaching career in Mercedes and in McAllen. After the war, she met and married the love of her life, Bob Bell, on February 16, 1946, and made McAllen their home. They celebrated 57 wonderful years together. Elsie was a loving and devoted wife, mother and grandmother that will be sorely missed. She always had a sweet smile and a sparkle in her beautiful blue eyes. She was a member of Central Christian Church. She served as a Cub Scout Den mother and for over 60 years, played in two Bridge clubs. She belonged to the Women’s Auxiliary at the McAllen Hospital where she worked in the gift shop for several years. She was a wonderful cook and baker. Elsie and her friend Hazel Robinson were known for their specialty birthday cakes such as trains and dolls. Elsie was preceded in death by her husband Bob and his six siblings, her sister Melba (Gordon) Winfield and her brother James (Virginia) Page. Remaining to cherish her memory are her son Bobby (Lou Anne) Bell, daughter Kay (Jim) Phillips; Grandchildren Tracie (Michael) Cipriano, Lisa (Tim) Beno, Laura Bledsoe, Lisa (Ross) McLaren, Devin Stiers, Trey (Veronica) Phillips, Jeff (Sharon) Phillips and Great Grandchildren Sophia, Carter, Elliott, Drew, Sagan, Gabrel, Bela, Harrison and Megan. Also surviving are numerous nieces and nephews. The family would like to extend a special thank you to her loving caregivers: Juanita Tamez, Maria Luisa Garcia, and Mari Sanchez plus the Allstate Hospice nursing staff. Due to Covid, there will be a private graveside service officiated by Pastor Bill Hicks with a Celebration of Life to be held in the future. In lieu of flowers, donations may be made to the Christ Covenant Church, 1320 Nolana, McAllen, Texas 78504 or a charity of your choice.

Shortly after celebrating the milestone of her 100th birthday, Elsie Page Bell peacefully entered her heavenly home on August 11, 2020. Elsie was born in Blooming Grove, Texas, to Gordon and Eula Page on June 27, 1920. She graduated Blooming... View Obituary & Service Information

The family of Elsie Bell created this Life Tributes page to make it easy to share your memories.

Shortly after celebrating the milestone of her 100th birthday,...