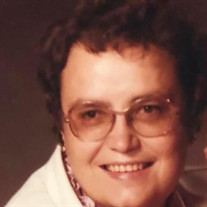 Elizabeth "Beth" Ann Miller, age 82, passed into eternal rest on the evening of January 12th, 2022 at the Heights of Alamo in Alamo, TX, in the presence of her two daughters, Deborah Sue Reynolds (Austin, TX) and Kathleen Annette Riley (Marble Falls, TX). Beth was born September 28th, 1939, in Cedar Rapids, Iowa to Ruth Wynifred Bru and Paul William Lincoln. Shortly after the death of her father in 1942, she moved with her mother and grandfather to McAllen, TX. There, she graduated from McAllen High School (1957), going on afterwards to fulfill a family tradition of attending Grinnell College. After a couple of years, she transferred to the University of Iowa to complete her college education. On September 8th, 1961, Beth married Clyde Raymond Hess at the First Presbyterian Church in Mcallen, TX. They resided in McAllen raising their two daughters, Deborah and Kathleen, until her husband's untimely death in 1973. Beth worked at McAllen's First National Bank first as a telephone operator and later as a computer programmer. After a number of years, Beth married Norman Duane Miller on March 27th, 1984 in Austin, TX. They moved to Ithaca, Nebraska on a 10 acre farmhouse property where she continued her career as a computer programmer at the First National Bank of Omaha (Nebraska). In her later years, she enjoyed traveling the country with her husband and spending holidays with family and friends. She eventually bought a home in Alamo, TX with her husband in which they spent the rest of their years together. Beth is remembered by family and friends by her detail-oriented nature, mastery of cross-stitching, being the family photographer, her love of traveling with her husband, and her skill on the computer. She is survived by her two daughters Deborah (Ruben) Reynolds and Kathleen (Jeff) Riley; her three grandchildren, Christopher Reynolds (Austin, TX), Skylar Riley (Austin, TX), and Summer Riley (Marble Falls, TX); her sister-in-law Marlene Habhab (Waukon, IA); and two nieces and one nephew, Musty, Abby, and Mimi Habhab.

The family of Elizabeth "Beth" Ann Miller created this Life Tributes page to make it easy to share your memories.