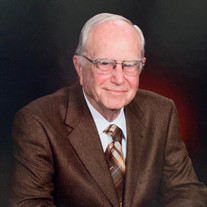 Edwin Edward "Eddie" Forshage Jr., 86, passed away Sunday, September 29, 2019 at Rio Grande Regional Hospital, in McAllen, TX, after a short illness. Eddie, was born in Seguin, Texas in 1933. Active in the Boy Scouts, he proudly achieved the rank of Eagle Scout. Upon graduating from Seguin High School in 1951, having lettered in three sports, he was off to Texas A&M where he obtained a Bachelors degree in Civil Engineering. As a member of the Corps, he attained the rank of Company Commander of D Battery Field Artillery, and was a member of the Ross Volunteers. While completing his service obligation in the US Army Reserve, he married the love of his life, Alta Zoe Pape, of Seguin, in 1961. By this time, Eddie had already begun a 55 year long career in highway construction, working for such companies as J.M. Dellinger Co. and Motheral Contractors, Inc. in the early years, and in 1976, starting his own company, Foremost Paving, Inc., which is still active today. He loved driving the roads of Texas. He loved building new ones, fixing old ones, and was always respectful of the effort and integrity it took to build a good one. Eddie had been a member of Our Lady of Sorrows Catholic Church since 1973. He loved fishing the Lower Laguna Madre. He also loved photographing wildlife and raising cattle on the family ranch. Eddie is survived by his loving wife, Alta; their four children: Ellen (Leo) Linbeck, Eddie (Herminia) Forshage III, Joe (Shawn) Forshage, Chris (Sydney) Forshage; 14 grandchildren: Leo IV, Carolina, Francisco, Vivi, and Berhane Linbeck; Stephen (Melissa), Genie, and Morgan Forshage; Glynn (Alicia), Evan, Price (Enya) Forshage, and Claire (Travis) Renegar; Olivia and Sonny Forshage; 12 great grandchildren; his sister, Carol (+Bill) McClusky; and numerous nieces, nephews, and cousins. He is preceded in death by his parents, Sophie and Edwin Forshage Sr., his sisters Frances (Sam) Terry, and Marion (Ray) O'Neal, and niece, Margaret McClusky. Visitation will be held at Kreidler Funeral Home in McAllen on Sunday, October 6, 2019 from 6-8 pm, with a rosary at 7 pm,. A funeral mass will be held at Our Lady of Sorrows Catholic Church in McAllen, at 10 am, on Monday, October 7, 2019. Burial will follow at Valley Memorial Gardens in McAllen.

The family of Edwin Edward Forshage, Jr. created this Life Tributes page to make it easy to share your memories.