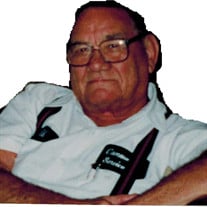 Edward “Ed” Lee Krause, 92, of McAllen, died Sunday, December 3, 2017. Ed, son of E.J. and Minnie Lee Krause, was born February 18, 1925 in Burlington, Texas. He spent most of his life in McAllen where he was long-time owner of Commercial Service Co. Ed proudly served in the US Army in the South Pacific during World War II. He was airborne qualified and served with the Americal Division, 247th Field Artillery Battalion, Battery A. Ed is proceeded in death by his parents; his wife, Marie; sister, Wilma, and brothers, Ray, Darrel, and Donald Paul. Ed is survived by his sons, Michael (Leigh Ann+), Stephen (Debby), and John; his brothers, Robert and Kirby; granddaughters, Kimberly and Suzanne; and long-time caregivers Susana Anzaldua and Vicky Garcia. Memorial services will be held at Kreidler Funeral Home at 11:00 AM on Friday, Dec. 8th. In lieu of flowers, the family suggests donations be made to St. Jude Children’s Research Hospital.

The family of Ed Krause created this Life Tributes page to make it easy to share your memories.